In FQ3'21, Disney's revenue was up 44.5% YoY to $17.02 billion, and the Non-GAAP EPS also exceeded the expectation ($0.80 vs. consensus of $0.55). The domestic Disney Parks drove most of the earning beat as their revenue was up more than ten times to $2.66 billion and achieved the break-even for the first time since the pandemic, despite operating at a limited capacity and with no international travelers. On the other hand, Disney's linear networks and content license segment delivered just as expected.

Disney also beat the headline subscriber numbers of the streaming business: Disney+/ESPN+/Hulu added 12.4M/1.1M/1.3M subscribers during the quarter. However, investors are more concerned with Disney+'s ability to add profitable ones. Most of the Disney+ new subscribers (10 million-ish) came from Disney+ Hotstar, who carry a significantly lower ARPU. Hulu was the bright spot for Disney indeed, as its Live TV + SVOD ARPU jumped 23.5% YoY, helped by a strong advertising market. 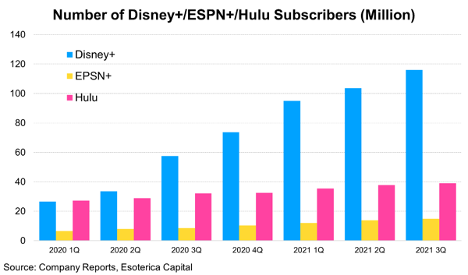