Intel announced a lot of nothing. Intel hosted the "Intel Accelerated" event to update the roadmap and strategic goals earlier this week. The biggest news out of the event was

The process node renaming was essentially just for better marketing and had no real impact on the business. With the new names, Intel's updated roadmap indicates new node introductions every four quarters going forward. According to the current plan, Intel will reach parity with TSMC by 2024 and retake the process leadership in 2025. Catching up at the leading edge is critical for Intel's foundry business, and the announcement of AWS and Qualcomm as foundry customers seems to have validated Intel's plan. However, a closer look says otherwise.

Amazon will only be using Intel's foundry for packaging. It is a nice win, but it also indicates Amazon has no intention to use Intel for the more critical chip manufacturing job anytime soon. Intel also announced Qualcomm as a leading-edge foundry customer for the Intel 20A node, available in 2024. It's four years out, so naturally, there's a lot of uncertainty. But even with the uncertainty, it is still a significant win for Intel's foundry business if they have secured Qualcomm as a customer. However, when asked about the partnership with Intel on the earnings call later that week, Qualcomm's CEO Christiano Amon provided a very different answer.

"We are evaluating their technology. We don't yet have a specific product plan at this point, but we're pretty excited about Intel entering the space. I think we all determined that semiconductors are important and resilient supply chain is only going to benefit our business."

So what did Intel announced at the event? Some new names for the same products, the same roadmap based on the new names, and two significant customers with no significant businesses. That sounds like a whole of nothing to us.

Could AMD's gross margin be higher than Intel's? While Intel is busy making promises, AMD is taking advantage of its product leadership and improving margin. The company delivered a clean beat-and-raise across the board in the second half. Revenue, margin, and EPS were all very strong for both second-quarter results and third-quarter outlook. The company has raised its 2021 growth target meaningfully for two quarters in a row. It is now looking to grow revenue by over 60% for the year, compared to the 37% target it provided only six months ago. The strong revenue growth is also driving an inflection of the margin, with operating margin reached 24% in the quarter, doubled from a year ago. If the second half plays out as the management expected, AMD's gross margin will reach 50% in the fourth quarter, a 2000bps improvement over Lisa Su's tenure as the CEO. Could we see AMD's gross margin surpassing Intel in the not-so-distant future? 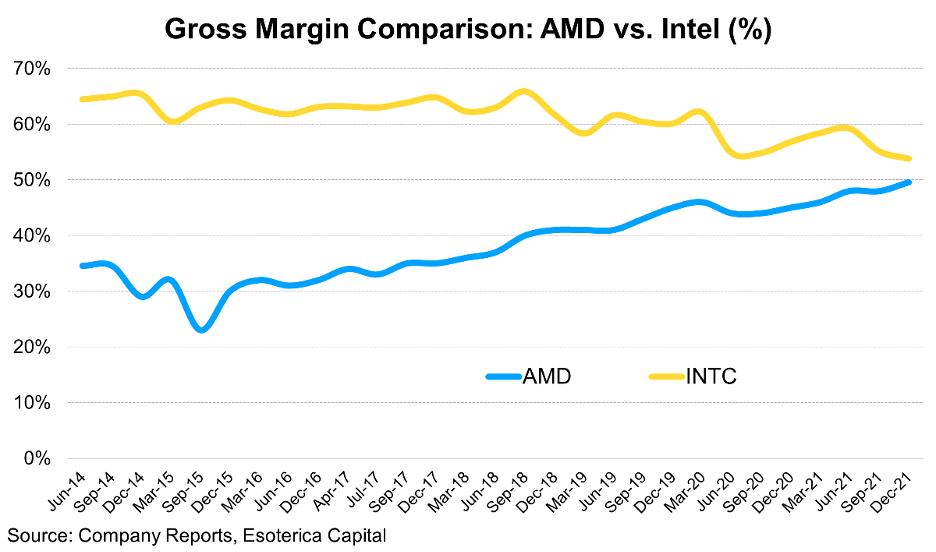 Gross Margin Comparison: AND vs. Intel (%)