“It’s worth remembering that it is often the small steps, not the giant leaps, that bring about the most lasting change.” -- Queen Elizabeth II

China has been subject to certain U.S. semiconductor restrictions for the better part of the past three years. But this new license requirement appears to be a significant escalation, in our opinion. The previous efforts from the U.S. to limit China’s access to semiconductor focuses more on the manufacturing of semiconductor devices, like limiting the use of U.S. semiconductor equipment and design software.

For the application of semiconductor devices, the U.S. previously didn’t put a broad restriction and only focused on a handful of companies like Huawei by leveraging the Entity List. In other words, the goal is to prevent China from manufacturing advanced semiconductor chips domestically, but not so much to prevent the vast majority of Chinese companies from accessing the latest chips provided by U.S. companies. However, with the latest licensing requirement, there seems to be a subtle shift in its approaches.

In the 8-K filed by Nvidia, the company disclosed that the U.S. government indicated the purpose of the new license requirement is to address the risk of these products being used for military end users. Still, all future sales to China are now subject to licensing requirements. It is up to Nvidia and its Chinese customers to prove that the chips are not used for military use cases.

Most of Nvidia’s datacenter GPU in China are sold to cloud service providers like Alibaba and Tencent, which in turn offers their cloud services to companies across different industries. It is much easier to prove that the chips are being used for something than to prove they are not. We suspect that for any of Nvidia’s customers in China, the chance of getting a license for these high-end datacenter GPUs from the U.S. government is relatively small. There’s also the risk that the scope of restriction goes beyond GPU to other areas like high-end CPUs, networking equipment, or autonomous driving chipsets, a risk that semiconductor investors can’t ignore.

Marriage Faltering, But Not Yet Divorced

This inevitably leads to a more prominent topic, the current U.S.-China relationship, which is like a faltering marriage, just short of divorce.

A major development from August is the milestone deal PCAOB reached with its Chinese counterparts to audit ADRs (Chinese stocks listed in the U.S.). This deal, in our opinion, demonstrated a reluctant interest across the Pacific Ocean to somehow make it work. Continuing our "marriage" analogy, the couple still needs each other for the time being. The audit agreement is a big deal. We are glad there is not just bad news between the U.S. and China. Unfortunately, it’s not time to celebrate.

Reaching an agreement is comparatively easy, and still trickier is the implementation. Indeed, juxtaposing the two sides’ press releases reveals a significant gap between the two sides’ sentiments and appeals. For example, PCAOB emphasizes it has the “sole discretion” when auditing ADR companies with no “consultation with, nor input from, Chinese authorities.” At the same time, China’s version insists that American regulators must go through Chinese counterparts to access audit work papers, personnel, and other information.

We would be surprised if the implementation goes without hiccups, especially against such a contentious backdrop of great power rivalry. Many things can still go wrong. As such, this deal does not eliminate Chinese ADR’s delisting risks, in our view.

And speaking of the contentious backdrop, Bloomberg reported that the Biden administration is considering actions to curb U.S. investment in China’s tech industries. Well, what can we say...Not surprised! The U.S. is trying to deny and defer China’s technology advancement by cutting off the latter’s access to capital and talent.

Perhaps somewhat relieving is that the “actions” weighed by the Biden administration will not be a blanket ban, in our view. In theory, a more probable route is to set up a new institution with full discretion to block any U.S. investment into China. In reality, it would have to rely primarily on a set of negative lists. To deny and defer, there is no change in the U.S.’s grand strategy and philosophy towards China Tech. Rather, we view this as a project of optimization, essentially an SOP (Standard Operating Procedure) of its “deny and defer” approach on China Tech, where the U.S. is streamlining a process that is currently fragmented, ad hoc, and inefficient. The bad news? We expect more of these to come.

Recent research from Alan Detmeister at UBS suggested that the increasing supplier delivery times (a proxy for supply chain disruption and bottleneck) were more important than the tight labor market in causing the surge in inflation in 2021. In this vein, an improving supply chain is much-needed good news for our fight against inflation (Chart 1). The comment from Lululemon on the supply chain’s improvement adds to our conviction that inflation in the U.S. has likely peaked. 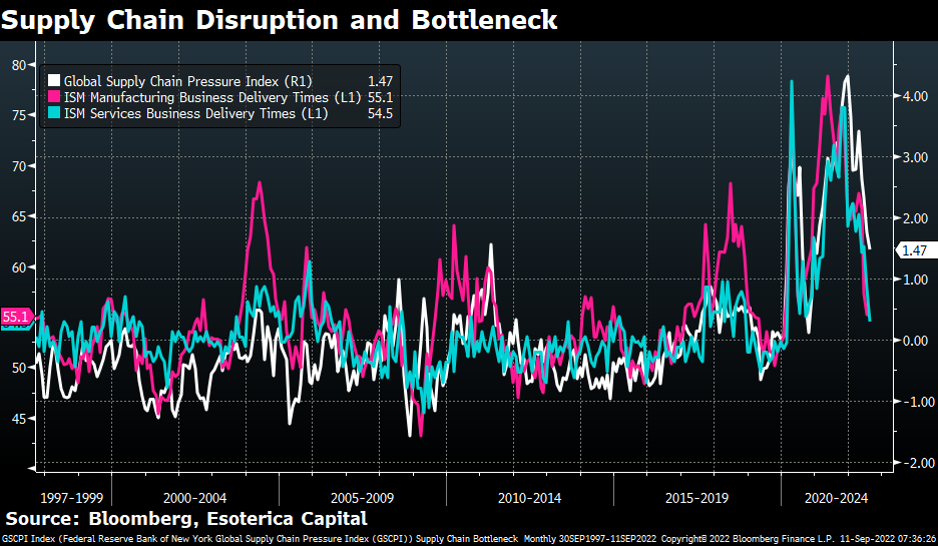 “Ocean lead times...So we typically have seen [before COVID] ... average about 45 days. These have gone up to 90 days plus during...peak disruption. We've seen them drop approximately to 70 days. So not back to where they were, but definitely an improvement to what we've seen.” -- Meghan Frank, CFO of Lululemon

However, this might come at the cost of retailers, whose inventories have been piling up. Aside from the demand for goods slowing down, the improving supply chain also has played a significant role, evidenced by a) freight shipping improved. Rates trend down, and deliveries are increasingly punctual; b) the readiness metrics of Asian producers have also caught up, meaning orders are fulfilled now either on or ahead of schedule.

Retailers end up with inventories both more in quantity and earlier than expected. But not all inventories are created equal. Perhaps for some, high levels of inventory prevent missed revenues from stockouts; but for most others, it’s a hot potato that will burn a hole in their margins. Watch out.

As we illustrated last month, the Fed disliked the market rally since the mid of July and pushed back hard. The message throughout the month of August was loud and clear, “you guys are getting too far ahead, and this is not what we want.”

The rates market started to fall back in line with the Fed’s hiking outlook, and equities finally capitulated since the mid of August (Chart 2). The Fed Chair Jerome Powell reinforced the Fed’s hawkish resolve at Jackson Hole, dampening the market’s wishful thinking of “the Fed’s Pivot.” The worse-than-expected inflation across Europe and the better-than-expected US growth data also added fuel to the fire. 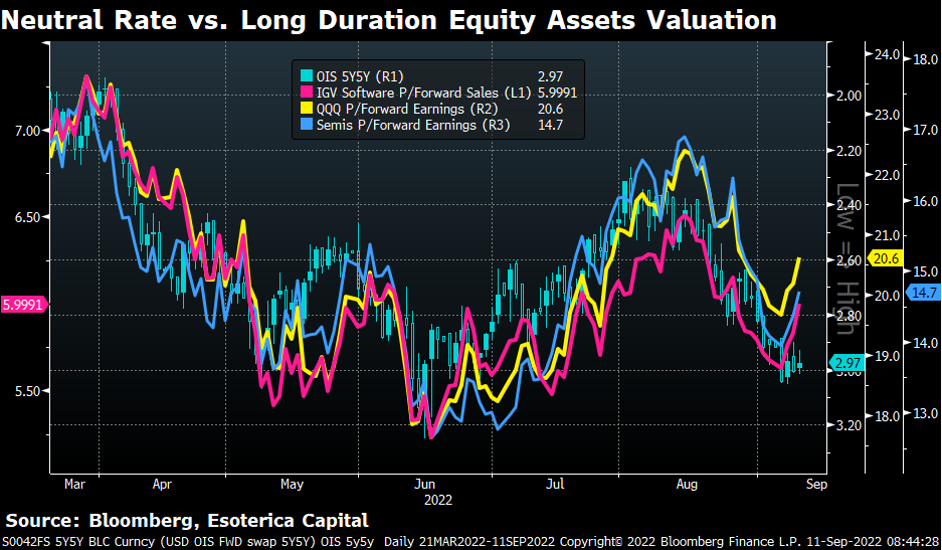 As a result, the market-implied neutral rate quickly rose from 2.4% to 3.0% (Chart 2), and the 10Y real yield had a gigantic move from almost 0bps to 88bps within a little more than a month (Chart 3), during which Equities inevitably suffered. However, digging deeper, we found equities started to diverge from rates at the end of August. Simply put, it seems equities are more convinced that we’ve seen the peak of inflation and that the real yield is overreacting now (Chart 3). Our thesis for growth assets stays intact: every dip could be an opportunity to buy in this range-bound market before “the Fed’s Pivot” finally arrives. It’s time to be a little brave. 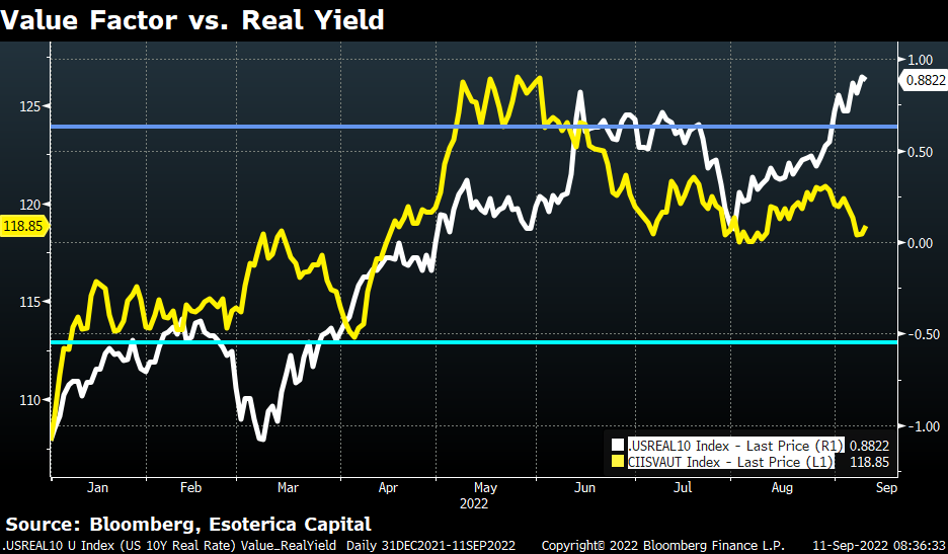