The Rolling Correction of Semiconductors?

It was well understood that the consumer electronics market, including PC and smartphones, had been weak over the past few quarters as the strong demand during the peak COVID period proved unsustainable. As macro uncertainty picks up and demand weakens, hardware OEMs are becoming increasingly cautious about the future and not replenishing inventories, creating a typical inventory down cycle in these markets. Semiconductor companies in the PC & smartphone supply chain expect their Q4 revenue to be 20% below prior expectations across the board. AMD saw its PC-related revenue cut by half as it tried to correct the inventory situation as quickly as possible by meaningfully under ship the end demand.

This kind of inventory correction is common after periods of strong demand, but it is much more severe this time due to the supply-demand imbalance over the past two years. It usually takes a few quarters to work through the inventory in the channel. When the end demand stabilizes, customers rebuild inventory, and the cycle starts again. These inventory corrections create much volatility in the markets and are short-term in nature. They also often mark the bottoms for the stocks as the bar gets reset lower.

However, the worry is that with a looming recession, it is just a matter of time before things break down in other markets that are further away from consumers (Datacenter, automotive), creating this “rolling correction of semiconductor” narrative. It seems that demand in those markets is holding up much better, at least for now, according to the companies reported recently. Still, we do not doubt that sentiment could turn negative swiftly with just a few negative comments. We don’t think there is a definitive answer, and we can’t prove this theory one way or another. But we believe these are fundamentally better markets with stronger growth, longer product cycles, higher margins, and stickier customers. If such inventory correction happens, it’s likely to create a good opportunity for long-term gain.

By and large, equity valuation is anchored to interest rates. For example, the 10Y real yield is the return of risk-free assets after adjusting for inflation. When the real yield falls, equity valuation goes up, and vice versa (Chart 1). There are other driving factors, such as the curvature of the yield curve and the implied volatility of rates, as we discussed in previous monthly letters. They could determine the tightness of financial conditions, which subsequently affects the valuation of risky assets. 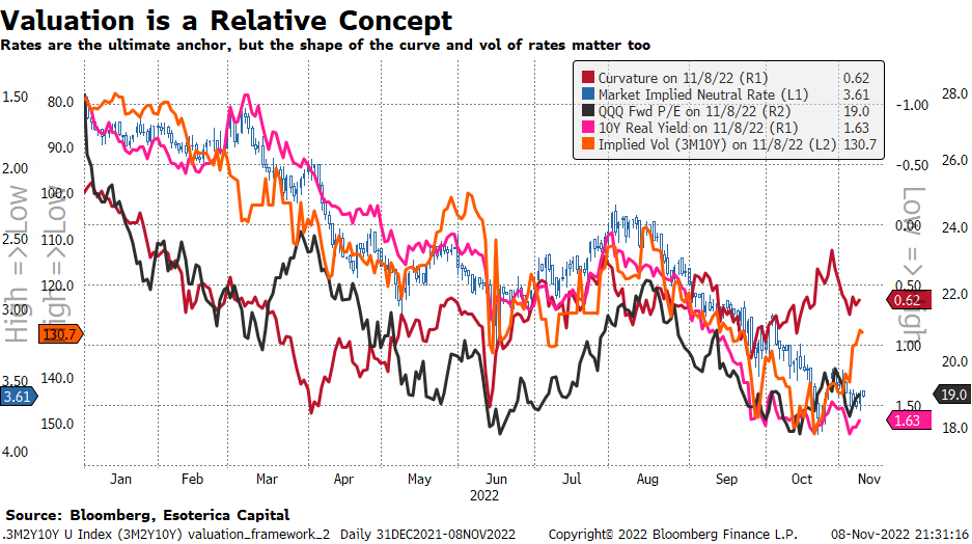 Valuation is a Relative Concept

Valuation is a Relative Concept

Through this lens, we could make sense of the fluctuation of equity valuation in the past month. Coming into October, stronger-than-expected inflation data and labor market print, plus the continued hawkish tone from the Fed and chaos out of UK markets, have put much pressure on rates and the implied volatility of rates. These forces together brought down the valuation. However, the valuation held up relatively better, given that these driving factors were much worse than previous lows in June. The curvature of the yield curve, indicating an easier monetary policy stance, gave much-needed support to equities (Chart 1).

When the narrative of a slower pace of hiking rates due to concerns over financial stability and recessions gained more momentum, the curvature and the implied volatility started to lift the valuation, despite the rates remaining suspicious. This dynamic remained largely the same even after a dovish FOMC statement but a hawkish press in early November. Rates implied a tighter monetary policy stance than that indicated by the curvature and the implied volatility. As a result, the equity valuation got stuck in between.

Looking forward, in the absence of another significant inflation shock, we might stay in this “gridlock” before the Fed finally pivots. It’s a data-dependent process, as these driving factors will likely fluctuate within the range depending on the incoming inflation print. In other words, the equity’s valuation might have found the bottom, but the Fed’s “higher for longer” also caps the upside until data proves otherwise.

“Higher for Longer” Is Earning’s Problem

Last month we voiced our concern that the Fed’s higher-than-usual tolerance for deteriorating fundamentals could impose more downside risk on equities. The negative EPS revisions could hit investors before the Fed pivots. Unfortunately, this has happened during this earnings season (Chart 2). The companies, ranging from large-cap high-quality FAANG stocks to smaller and already beaten-down SaaS companies, all gave gloomy guidance without much exception, citing the challenging macro environment in the coming quarters. As a result, the stocks got hit by disappointing earnings without much support from valuations. 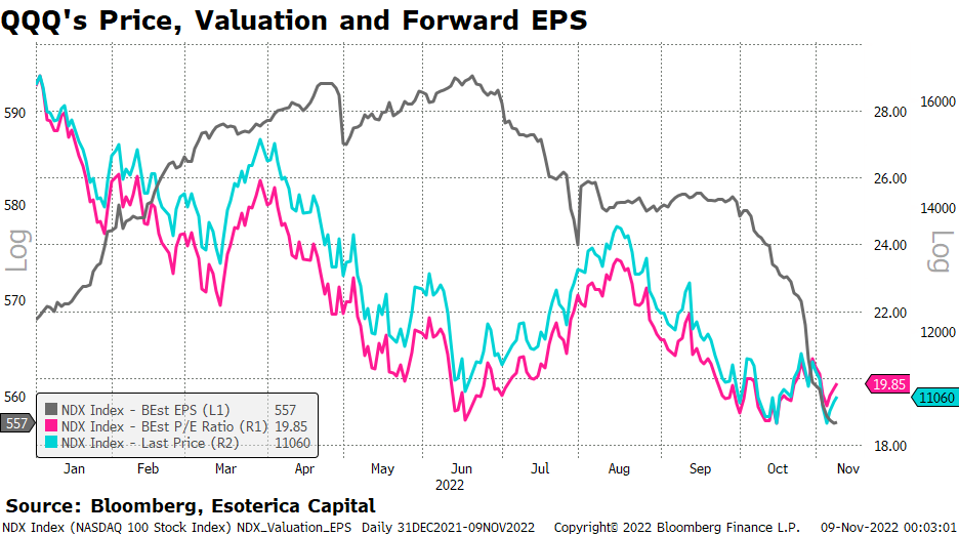 Worse, this situation could last as long as the Fed is convinced that “higher for longer” is the right policy stance. Although we tend to believe that the Fed underestimates how tight its monetary policy has been, the damage could be done before the Fed realizes it. The companies’ durable and resilient earnings in the coming quarters offer the best risk management in this environment. That’s where we should spend the most time on.

How Tight Is the Fed?

We have been challenging the notion that the Fed’s monetary policy is not tight enough to put down inflations. On the contrary, after being too soft on inflation in the first half of 2021, the Fed caught up quickly (here and here) since the fourth quarter of 2021. What’s frustrating but also understandable is that monetary policies work with quite significant lags. It just takes time, and the Fed probably needs to be patient. Over-killing might cause unnecessary damage.

Therefore, it’s encouraging to see that the Fed seems to acknowledge the issue now. In a recently published paper, “Monetary Policy Stance Is Tighter than Federal Funds Rate,” the researchers at the Fed concluded,

“Since late 2021, monetary policy has been substantially tighter than the federal funds rate indicates. Tightening financial conditions are similar to what would be expected if the funds rate had exceeded 5.25% by September 2022.”

We borrow the chart to show how tight the Fed is based on its research (Chart 3) and recommend this paper to our readers. 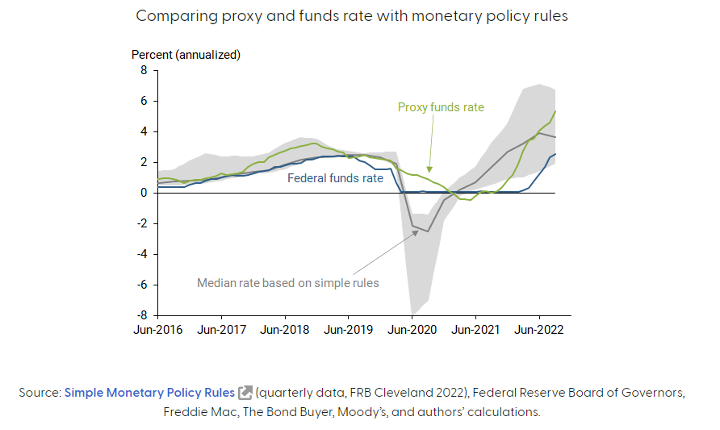