Here is the link to our latest discussion of the growth drivers of the U.S. eCommerce sector. Brands vs. Retailers, Who Have the Upper Hand in the Post-Pandemic Era?

The pandemic has completely changed the relationship between brands (such as Nike, Lululemon, etc.) and retailers. Before the COVID, retail giants such as Amazon and Walmart were gaining the upper hand in negotiating terms with brands for their large scale and access to consumer data. Warren Buffett has repeatedly called out this battle in various interviews.

However, the dynamic between brands and retailers has somehow reversed since the pandemic, while technologies have made direct-to-consumer (DTC) eCommerce much easier. It's known that many next-gen brands, such as Allbirds and Casper, bypassed traditional retail distributions and depended solely on eCommerce and self-operated stores from the very beginning. Legacy brands also started to prioritize DTC eCommerce and de-emphasize conventional retail distributions. Brands that began the DTC transition early have seen their efforts being paid off during the pandemic.

Nike, for example, has famously pulled products from Amazon in 2019 and dedicated more resources to DTC eCommerce, which has given Nike more insightful consumer data. The better consumer data allows Nike to make more innovative products. The strategy has been working well, and Nike's digital business topped $9 billion, more than doubled from FY'19. ECommerce accounts for 20%+ of Nike's total sales. The management aims at 40%+ of total sales coming from DTC in the long term. If done well, DTC eCommerce commands a higher margin. Lululemon's eCommerce contributed 51.9% of total revenue but accounted for 82% of total profit. Lululemon's eCommerce operating margin comes in at a staggering 45%, much higher than 28% at company-operated stores. 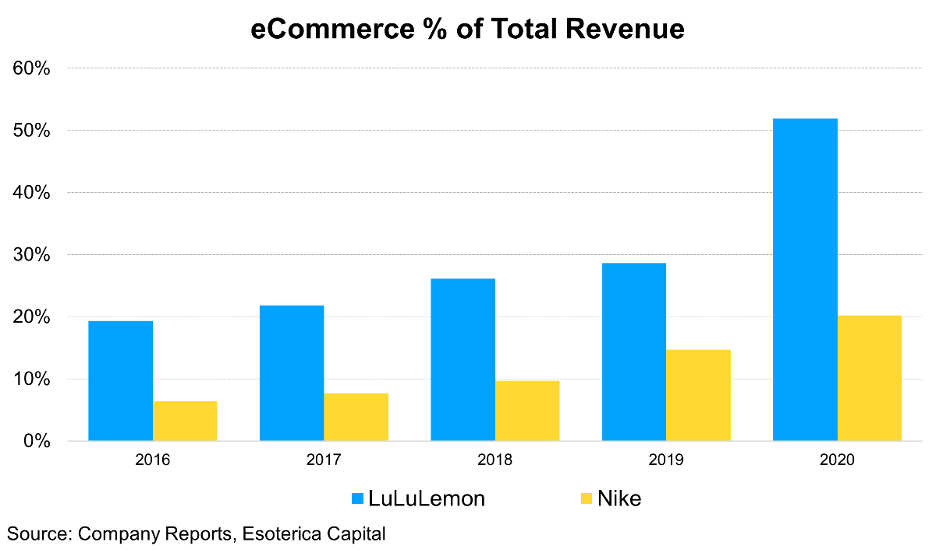 Brands shifting distribution from traditional retailers to DTC eCommerce is a growing trend for years to come. This change will put more pressure on big-box retailers, as they are already battling with Amazon on the other side. However, it's not all bad news for big-box retailers. Target and Kroger, for example, have also done well during the pandemic, thanks to their leading position in the grocery delivery market, which we will explore in our next post.