Sea's second-quarter GAAP revenue came in at $2.28 billion (+159% YoY), well ahead of the consensus of $2.02 billion. The gaming business (Garena) contributed the most beat. Garena's GAAP gaming revenue was $1.02 billion, up 169% YoY, mainly due to a less than expected deferred revenue of $156 million, -53% YoY. Adding back the deferred revenue, Garena holds a booking of $1.18 billion, up 69% YoY. Quarterly active users (725M, +103M) and quarterly paying users (92.2M, +12.4M) all improved nicely from the previous quarter thanks to the outperformance of Free Fire, which has 1 billion downloads on Google Play and 150 million peak daily active users. We are encouraged to see Free Fire becoming a phenomenon in the U.S., a lucrative gaming market with many potentials. 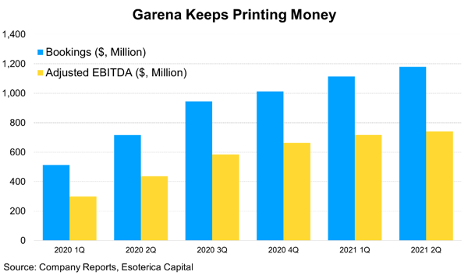 Sea's eCommerce division, Shopee, grew its revenue by 160.7% YoY to $1.16 billion. Thanks to the higher advertising revenue, the take rate improved to 7.7% versus 5.5% a year ago. Shopee continued to penetrate the Latam market, but management did not disclose more metrics for competitive reasons. The sales and marketing spending ($649M) accelerated, which management believes is a managed outcome. Sea's digital financial services also started to take off, with revenue up 643% to $88.7 million. We think Sea is fairly valued on the sum of part valuation. The further upside hinges on the management's execution to scale up faster than expected.