#WCOE in the Digital Economy Weekly

Overall, we think this is one of the best earnings calls from Facebook. The team lays out its vision clearly around communities, private messaging, commerce, and the next computing platform. The company is now trading at 12x EV/EBITDA, an astonishing 40% discount compared to Apple. 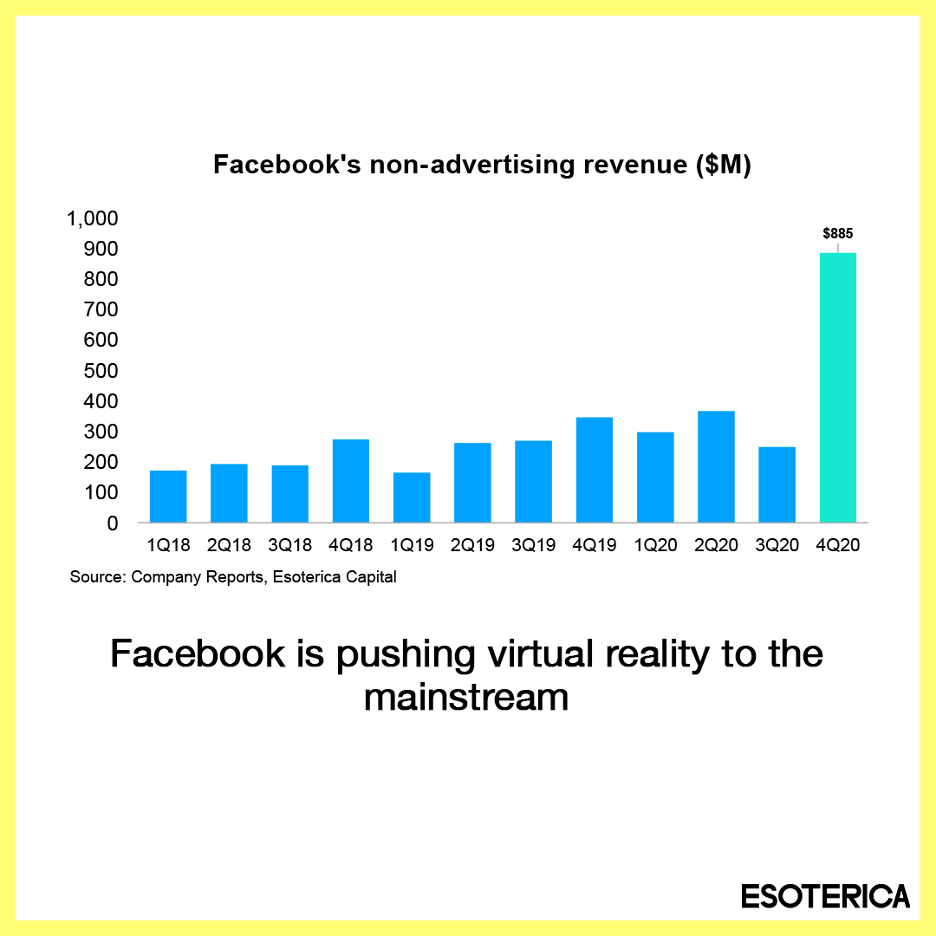 Skyworks' December quarter revenue was 40%+ higher than their initial outlook offered three months ago. You don't see revenue beat at this magnitude very often in semiconductors. On the other hand, we can't help wondering how the management team can be off its revenue projection this much.

The biggest driver is the 5G iPhone launch, with Apple contributing 70% of total revenue this quarter. 5G smartphone shipment is expected to more than double in 2021, while more applications outside smartphones are also emerging. 5G adoption is still in the earning innings, but the RF content increase is already driving a huge inflection point in Skyworks' revenue growth. 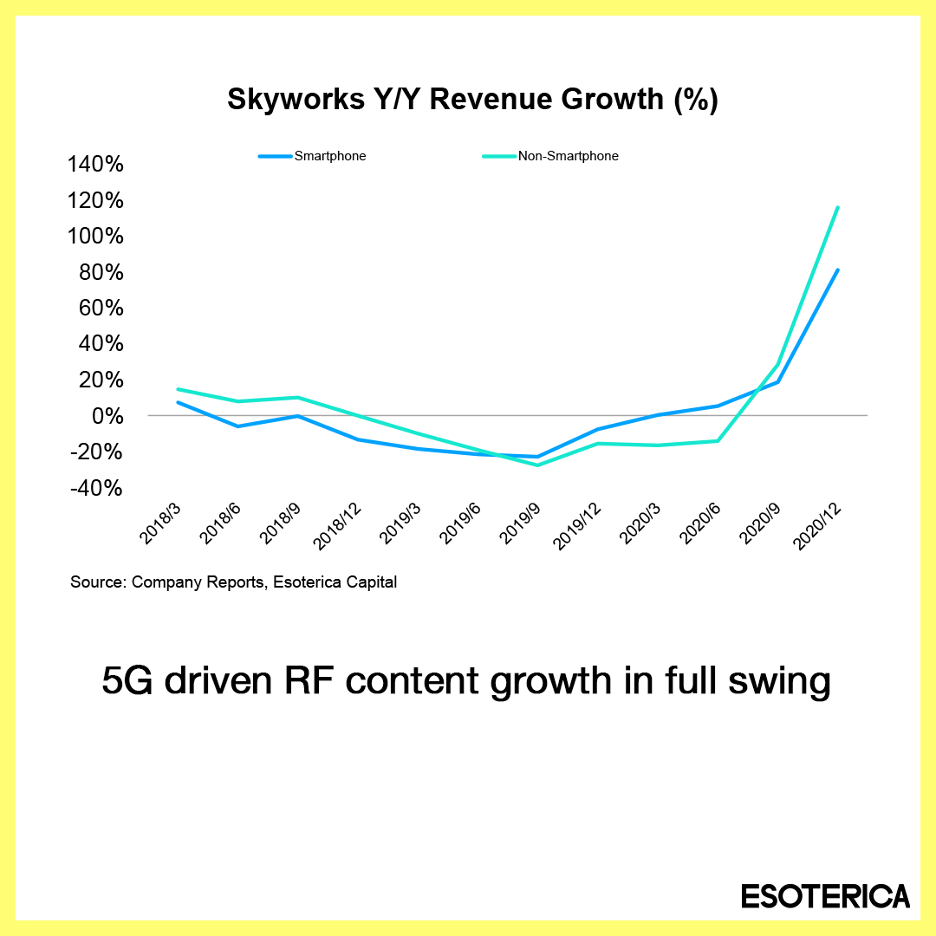 The install base of Azure Enterprise Mobility & Security (EMS, Microsoft's security offering) has reached 163 million seats. The security business has surpassed $10 billion in revenue over the past 12 months, up more than 40%. 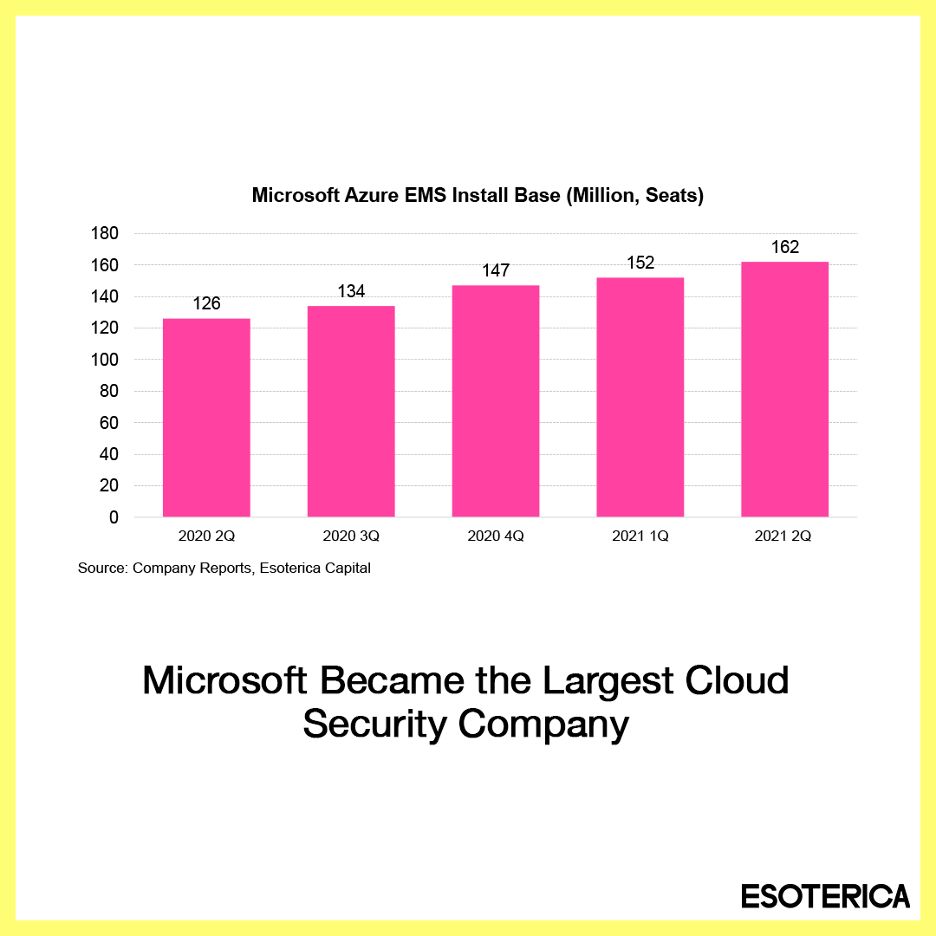 Another Quarter of "Boring" Execution by AMD

Business success is usually the result of brilliant ideas plus boring execution. AMD has made a public statement in the past that one of the primary goals is to establish a "boring execution," targeting a steady and predictable cadence of product launches and a steady improvement of financial performance.

The company delivered just that in the past few quarters. Over a turbulent 2020, AMD delivered 45% revenue growth driven by continued share gain in the PC and Server CPU market, doubling its revenue from just three years ago. 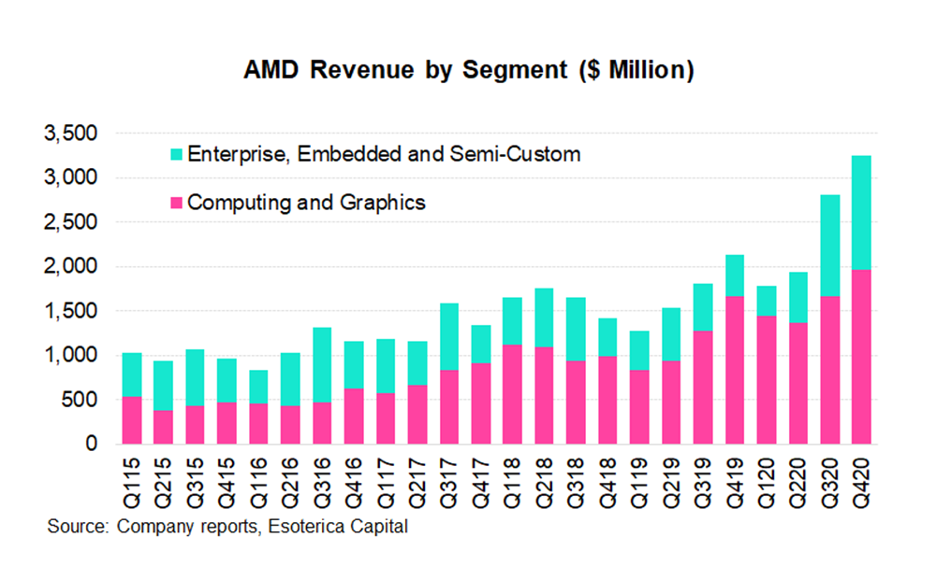 Verizon, on the other hand, surprised us by NOT materially increasing Capex in 2021 to support more aggressive 5G deployment, likely due to heavy spending on the C-Band spectrum. Here are the rationales in their own words, 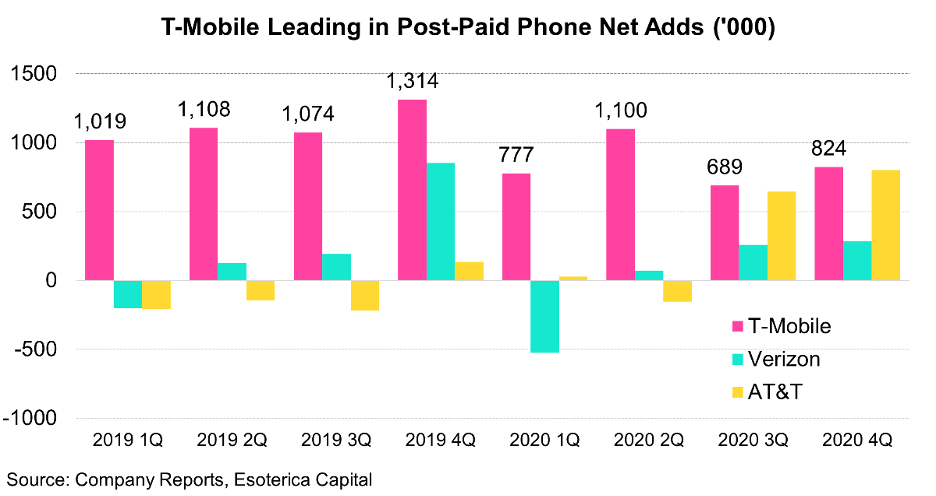 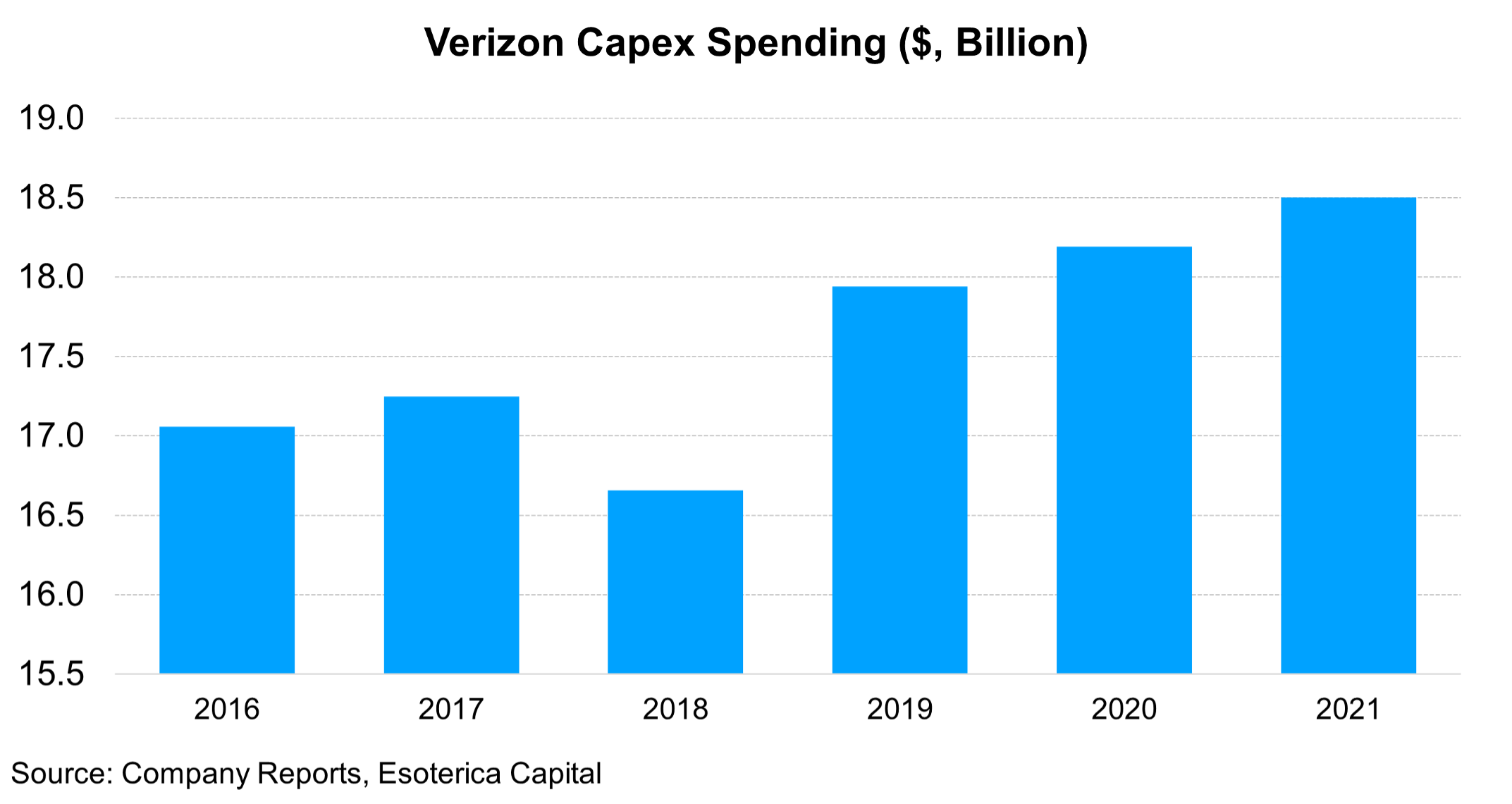 The revenue growth tells part of the story. As the digital transformation becomes inevitable, businesses are rushing to sign up for long-term contracts with cloud giants. Case in point, AWS backlog was up 69% to $50 billion; Google Cloud backlog tripled from $10 to $30 billion in the latest quarter. 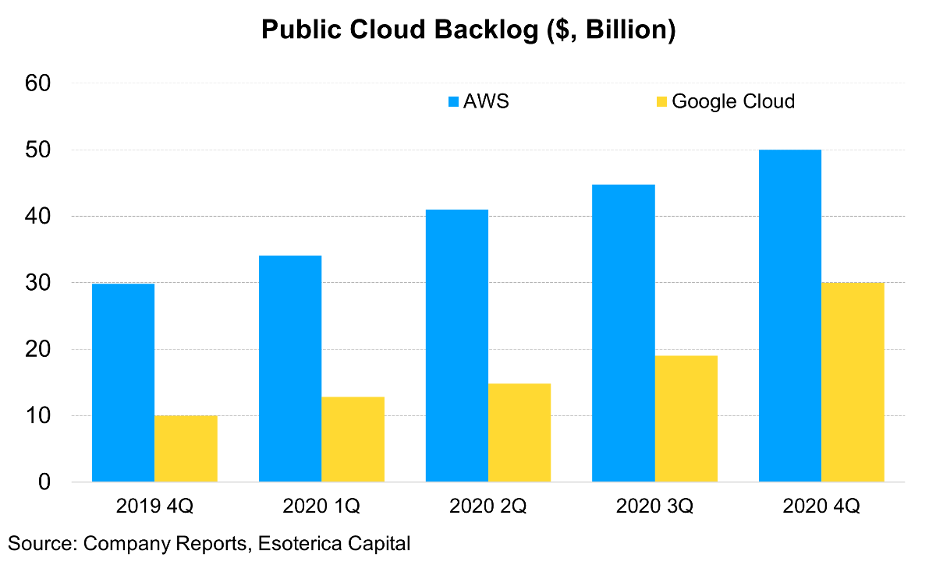 Qualcomm's Diversification Outside of Smartphones

Qualcomm is often viewed as a smartphone processor company. However, the non-handset part of the business, including RF front end, IoT, and Auto, now contributes close to 40% of the total revenue and grows faster. 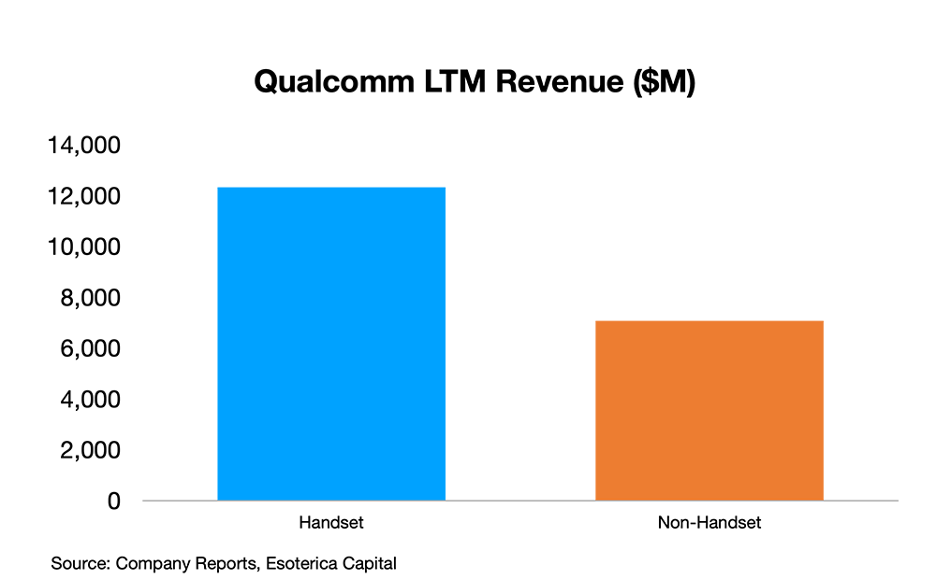 Amazon's third-party seller services, aka Amazon Logistics (AMZL), have had accelerated revenue growth eight quarters in a row, fueled by strong eCommerce demand and Primer One Day's success. In the fourth quarter of 2020, the revenue reached $27.3 billion with YoY growth of 54%. Amazon has not been shy of spending big bucks on building its logistics network. The square footage of Amazon fulfillment expanded 50% in 2020. The logistics-related Capex also increased more than 100% to $16.4 billion. 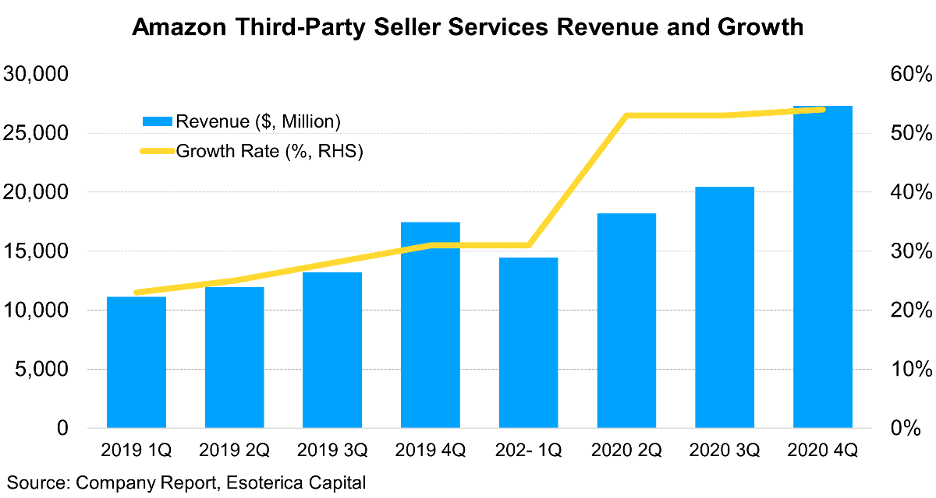 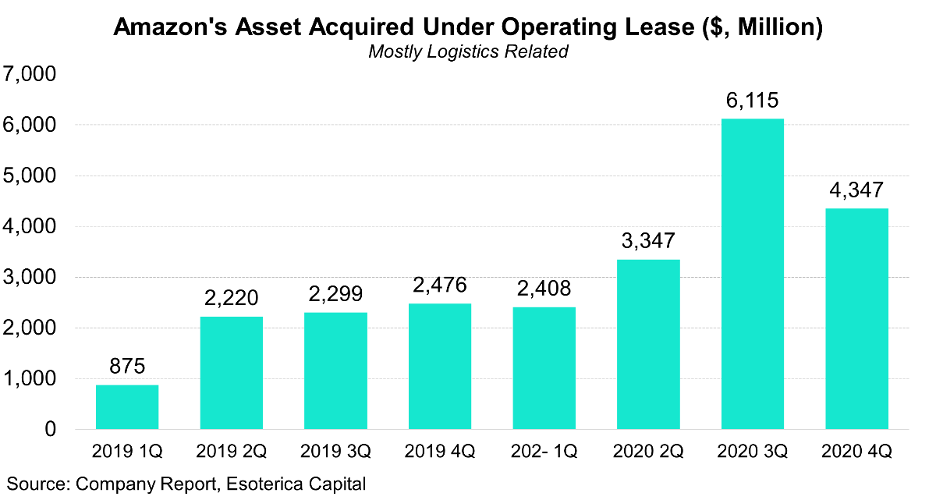