According to Bloomberg, UK might consider blocking the Nvidia/ARM acquisition due to national security reasons. From our recent conversation with other investors, most people don’t believe the deal would go through, and Nvidia stock didn’t move much on this news as expected. However, another merger target Xilinx fell by 2%, while the acquirer AMD stock up by 4%, and the discount reached a record high of 25% and continued to widen. 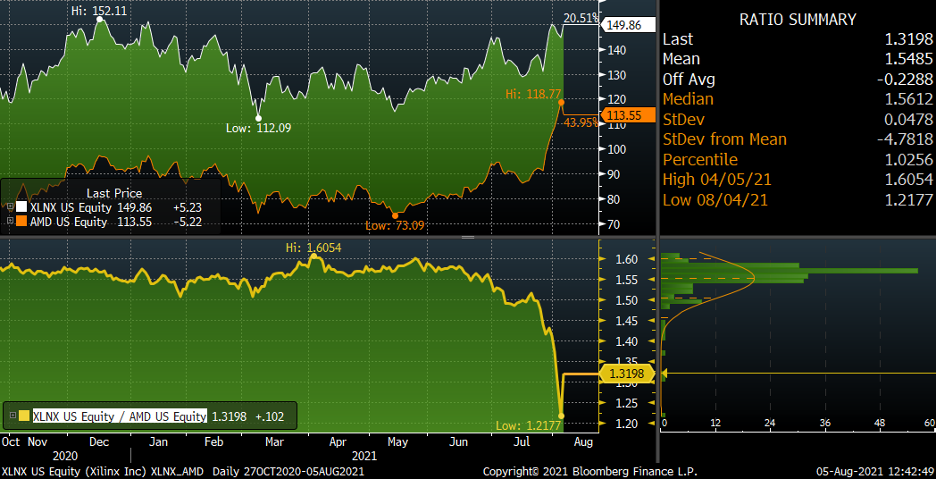 Another merger target Xilinx fell by 2%, while the acquirer AMD stock up by 4%

Another merger target Xilinx fell by 2%, while the acquirer AMD stock up by 4%

AMD first announced the acquisition of Xilinx in October 2020, at the price of 1.7234 AMD stock for every Xilinx share. For the nine months following the announcement, Xilinx was trading at a relatively stable 1.5x to 1.6x AMD level, or a ~10% discount. But that ratio quickly fell to 1.3x over the past few weeks, a 25% discount compared to the 1.7234x acquisition price.

One of the reasons for the recent move is the unwinding of merger arbitrage trade, in our opinion. After the deal was announced in October 2020, some merger arbitrage funds put on the trade to long Xilinx and Short AMD, betting that a successful deal will remove the price discount. According to the short interest data, AMD’s short interest hit bottom around the same time as the deal announcement and has climbed all the way back up to the early 2020 level before its second-quarter earnings in the mid of July. But as AMD stock ripped higher over the past two weeks, some of those merger arbitrage trades may be forced to be unwound by buying AMD and selling Xilinx, increasing the price discount.

If the AMD/Xilinx deal can go through by the end of the year like AMD management promised last week, the 25% discount of Xilinx stock will go to zero by then. The deal has already been approved in most of the countries, including the UK and EU. The biggest risk is whether China will approve the merger over the next few months.