Impression from Semiconductor Companies on CES 2022

After a virtual event in 2021, CES was back to in-person this year, but many companies still chose to attend the conference virtually due to COVID concerns. Product releases were lighter than usual, but there were still some interesting takeaways, especially in gaming and self-driving vehicles.

Gaming is always a highlight during CES, and it's no exception this time Nvidia announced RTX 3050, the most affordable GPU in the RTX 30 desktop lineup, starting at $249. According to the management, 75% of gamers have yet to upgrade to the RTX series, which supports hardware raytracing and DLSS. The RTX 3050 is their effort to lower the barrier and keep pushing RTX adoption. In addition, the company also announced RTX 3090Ti, the latest "BF GPU," and the laptop variant of RTX 3070Ti and 3080Ti. Overall, nothing groundbreaking but a solid lineup from team green.

AMD's Ryzen 6000 laptop processor was our favorite announcement this week. It is based on the updated 6nm Zen 3+ CPU architecture and the RDNA2 based integrated GPU, and it is the first integrated GPU to support hardware raytracing. First Ryzen 6000 laptop will be available in February, making it one of the easiest ways to get your hands on raytracing supported gaming devices. In addition, AMD also updated Ryzen 5800X3D, which features 3D V-cache, and teased Zen4 based Ryzen 7000 CPU coming in 2H2022. It is a typical AMD-style product announcement: predictable new product cadence with incremental improvement in between.

Intel's execution track record has been spotty in recent years, but it seems like they have delivered this time, at least on the CPU side. Intel announced a few variants of its 12 generation Alder Lake CPU in late 2021 and has seen an excellent consumer review, claiming performance leadership for the first time in the last few years. This week at CES, Intel expanded the SKUs to cover all price points and different PC form factors. The PC CPU market will be an exciting battlefield between Intel and AMD this year. On the GPU side, Intel keeps promoting its first discrete GPU named Arc, but offers few details. However, an interesting observation by Videocardz.com shows that Intel quietly changed its message on the official Arc website from "coming in Q1 2022" to "coming in 2022," suggesting another potential delay.

Alliances forming in the autonomous vehicle market There were no significant new product announcements for the autonomous driving system from semiconductor companies like Nvidia, Qualcomm, or Intel. Still, they are busy making friends with different players in the market. Nvidia has the broadest ecosystem support, in our opinion. The companies listed partners across the entire supply chain on its website, including car OEMs, trucks, and robotaxis to different tier-1 or sensor suppliers. Nvidia's Drive Hyperion platform attempts to standardize the autonomous driving architecture and streamline the adoption process by working with all these different players in the ecosystem. The platform has already seen promising adoption from many NEV makers.

Qualcomm chose a different approach, leveraging its already strong position in infotainment and connectivity to build out the digital chassis for cars module by module, including digital cockpit, connectivity, ADAS & Autonomous Driving, and car-to-cloud connectivity. Qualcomm announced new and extending partnerships with Volvo, Renault Group, Honda, and many more at CES. The company is now working with all leading automakers ranging from traditional players to NEVs. 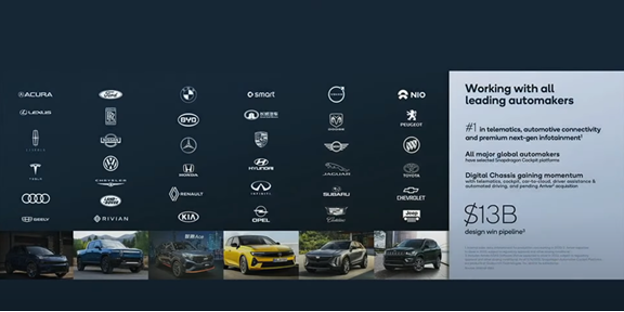 Qualcomm announced new and extending partnerships with Volvo, Renault Group, Honda, and many more at CES.

Qualcomm announced new and extending partnerships with Volvo, Renault Group, Honda, and many more at CES.

Intel's Mobileye has the weakest partner support, in our opinion. It is the pioneer in the ADAS market and has seen strong revenue growth in 2021, but primarily due to the design wins pipeline from a few years ago. The only new partner Intel announced recently is Zeeker and our check suggests that most new ADAS and AD design wins lately went to companies like Nvidia and Qualcomm. 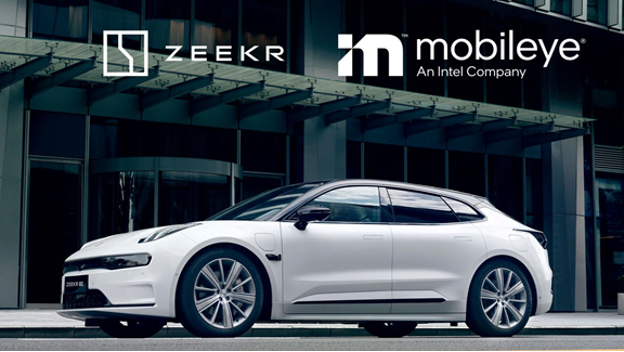