Long-Term Investors, One Quarter at a Time

In the spirit of “invest for the long term, but constantly vet,” we start this month’s letter with some thoughts on the latest quarterly earnings of companies of interest. Semiconductor companies delivered a similar set of solid results, including substantial revenue and margin upside, a growing backlog, and a continued chip supply shortage. AMD is worth highlighting: the server CPU revenue more than doubled from the last year, and the 2022 target is well above expected. The extremely strong result belittles Intel’s already lousy quarter, and we don’t expect the competitive dynamic between the two to change anytime soon.

However, most of these strong earnings were followed by underwhelming stock price reactions as investors kept worrying about “cycle peaking.” It is, of course, a bit frustrating for us to hear, “why would I buy semiconductors now if good results are not rewarded, and in-line results get punished in the market.” The semiconductor is still a cyclical business with ups and downs. We fully acknowledge that and are monitoring the cycle closely. But we are firmly in the camp that this cycle will be “stronger for longer” given the unprecedented demand across different end markets. We believe that “good results” will translate to a more valuable company; it is just a matter of time.

In the Internet space, oh, boy, it might be a gross understatement to say that some of those results and the price actions were just wild.

We were left with more questions than answers:

The violent price swings of the Internet companies as a group were primarily not for surprising results but caused by investors positioning. It tells how nervous and sensitive investors are right now, making the market nearly impossible for any investor with a short investment horizon to navigate. On the flip side, it further reinforces the importance of having a long-term mindset.

It certainly felt that way when the Fed came out with the full force to orchestrate a sharp U-turn in their fight against not-so-transitory inflation coming into 2022. Fed Chair Jerome Powell neither blinked for the ongoing equity market slump nor showed any slim worry of over-killing that might unnecessarily slow down economic growth too much.

The Fed's motivation is clear: they must get back in the driver's seat with ALL options in their hands, given the very fluid situation of the global supply chain disruption, Covid-induced labor shortage, and increasing political pressure from both sides of the aisle. We would probably do the same if it were our job. When the Fed refused to show its bottom line, markets had to discount towards the worst.

In other words, the rates market did not fight the Fed on the front end while betting on a potential policy mistake for overly aggressive tightening to finish the cycle earlier. No wonder we started to hear jitters on recession (way too early for that!).

Equities didn’t put up a fight either (Chart 2). The rate-sensitive stocks, such as fast-growing SaaS companies with hefty valuations, started de-rating when they smelled the Fed’s pivoting in November last year and haven’t looked back since then (Chart 3). Their multiples have dropped to the level only seen at the end of the previous cycle (2018/2019), which we believe was an entirely different regime from today (will elaborate on this later). More mature growth companies, like those in QQQ, have only fared slightly better, but you get the message. 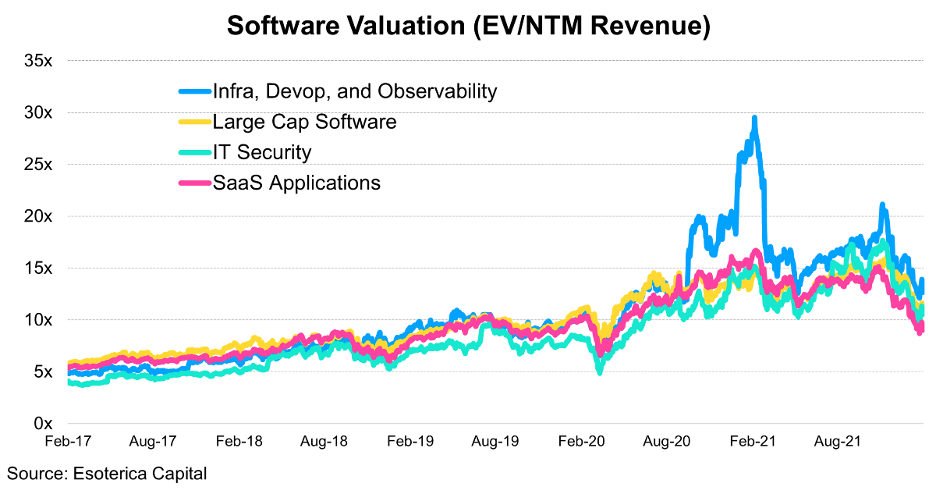 Is this capitulation overdone or only the beginning of the end? We argue it’s the former, particularly when benchmarked against the terminal yield, despite running the risk of further sliding in the near term.

Not Time to Quit, but Do Choose Wisely

Simply put, history had shown that when 1) we were at the beginning of the rate-hiking cycle; 2) the yield curve was on a flattening trend but still a bit away from inversion (60-ish bps now); 3) PMI was off the peak, but firmly in the expansionary territory, equity markets had a lot of room to run higher (Chart 4).

This time around, the Fed’s balance sheet run-off (Quantitative Tightening, QT) might complicate things as they had only done it once historically, which we won’t call a success. However, if the whole premise of an aggressive balance sheet run-off is to protect the yield curve from inversion, we’ll have to take it at face value for now. A healthy yield curve is also a tailwind to risky assets if that worked out.

It’s not time for investors to quit taking equity risk, but we might do better if we choose the proper exposures as the cycle matures. Looking through the equity factors’ lens (see Appendix), which is cleaner and more consistent, we believe short value (cheap stocks) and size (small caps) and long high quality might fare better along with a flattening yield curve (a proxy for a maturing cycle).

It’s worth mentioning that there is an apparent discrepancy between the value factor and the yield curve now (Chart 7). We believe a fast-rising real yield has supported the outperformance of value stocks. However, when the tide turns, the gap should be closed. It’s likely value stocks will give up their gains (Chart 5).

A critical assumption behind our analysis and strategy is that we have entered a new macro regime since 2019 (Chart 6). The terminal yield will be lower than that in the previous cycle; so is the real yield.

In the previous cycle, the 10-year real yield stayed at a low level within a tight range (0 to 100bps). The real yield is the ultimate anchor to valuations of all risky assets as it represents the actual return of risk-free assets after adjusting for inflation. When the real yield is low, it implies high prices for risk-free assets, which lifts the “fair” prices of other risky assets. Investors might have to adjust their valuation framework accordingly if the real yield stays in an even lower range (-100 to 0bps) in this cycle.

Another important implication of lower yield is that “growth” will continue to be a scarce asset that investors will pay up for. Tying back to favored factors mentioned earlier, we believe rotating into large-cap, high-quality, growth assets is the proper strategic direction when the cycle advances.

Out-of-control inflation does impose some near-term risk to our assumptions. We borrow Dr. Lacy Hunt’s insight to explain why we believe the current inflation pressure will fade. Hopefully.

“The U.S. economy has clearly experienced an unprecedented set of supply-side disruptions, which serve to shift the upward sloping aggregate supply curve inward. In a graph, with aggregate prices on the vertical axis and real GDP on the horizontal axis, this causes the aggregate supply and demand curves to intersect at a higher price level and lower level of real GDP. This drop in real GDP, often referred to as a supply side recession, increases what is known as the deflationary gap, which means that the level of real GDP falls further from the level of potential GDP. This deflationary gap in turn leads to demand destruction setting in motion a process that will eventually reverse the rise in inflation.”