Earlier this month, Qualcomm officially announced an all-cash transaction to acquire Veoneer for $4.5 billion together with private equity firm SSW Partners. Under the acquisition agreement, SSW Partners will acquire all outstanding stock of Veoneer and sell the Arriver business to Qualcomm shortly after. SSW will retain the rest of Veoneer’s business, including Restraint Control Systems and Active Safety business.

Veoneer is a Tier-1 automotive supplier based in Sweden. Most of Veoneer’s revenue is from hardware components and radar and vision systems, which is not Qualcomm’s core competency. From Qualcomm’s perspective, the most exciting part of Veoneer’s product portfolio is the Arriver software. In the letter sent to Veoneer’s board proposing an acquisition, Qualcomm CEO Christiano Amon clearly stated that he only wants the Arriver asset and plans to divest the rest of the business.

Qualcomm’s current automotive business mainly consists of the digital cockpit, infotainment, and in-vehicle connectivity. The partnership with Veoneer was an important effort for Qualcomm to broaden the product offering, accelerate the push in ADAS and autonomous vehicles, and Arriver was one of the critical pieces of that push.

Arriver is a perception and driving policy software stack developed by a stand-alone entity within Veoneer. For more than a year, the Arriver team has been collaborating with Qualcomm. In the presentation outlining the collaboration in August 2020, the two companies planned to build an integrated solution combining Arriver software and Qualcomm’s Snapdragon Drive Platform. Qualcomm will market and sell the solution to auto OEMs and other Tier-1 auto suppliers, while Veoneer will sell the solution directly to OEMs. 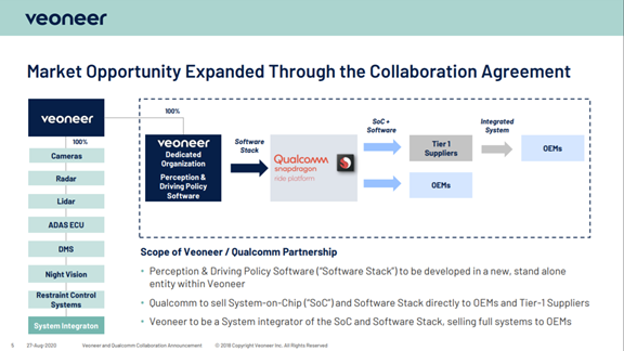 Arriver is a perception and driving policy software stack developed by a stand-alone entity within Veoneer.

Arriver is a perception and driving policy software stack developed by a stand-alone entity within Veoneer.

However, on July 22, 2021, another major Tier-1 supplier Magna offered to acquire Veoneer for $3.8 billion. The deal could potentially make the Qualcomm-Veoneer collaboration much more complicated. With a much stronger Tier-1 supplier owning the critical piece of the solution, Qualcomm will have much less control over the direction of the collaboration and find it very hard to sell the solution to other Tier-1 suppliers like Continental and Bosch, thus significantly limit the addressable market. It is understandable why Qualcomm CEO wrote such a strong-worded letter to Veoneer’s board of directors less than two weeks after the Magna announcement. By working with SSW partners and structuring the deal this way, Qualcomm doesn’t have to worry about divesting the rest of the business, gets Arriver software stack to focus on things that matter for them solely.

The acquisition fits well into Qualcomm’s strategy to diversify away from mobile and push more into the IoT market. While mobile is still the most critical driver for the company, auto and IoT combined contributed 26% of revenue in the most recent quarter, the highest level since the company started disclosing revenue by end markets. We expect the two segments to keep posting faster growth and contribute more meaningfully going forward.