Qualcomm is one of the key enablers of 5G and the digital economy in general, given its strong position in cellular technology. The company reported a solid quarterly earnings result this week, and one thing stood out: the push into radio-frequency (RF) front end is paying off.

Qualcomm was known for its leading position in the baseband market, but it has not been a significant player in the RF market historically. The company's push into this market started in 2016 when they partnered with TDK in a joint venture called RF360, then Qualcomm ended up buying the whole thing last year. We knew the business has been making good progress from management comments and the teardown of recent 5G smartphones, but we never figured out how significant the RF segment is for Qualcomm. Four years after the initial announcement, we finally got a chance to see how much progress the company has made in this market financially.

When providing revenue guidance for the current quarter ending September, the management indicated revenue from RF front end would be around $750 million in the quarter. Compared to Skyworks and Qorvo, the two most significant RF front end vendors with quarterly revenue in the 800 million range, Qualcomm is already one of the market's largest players. 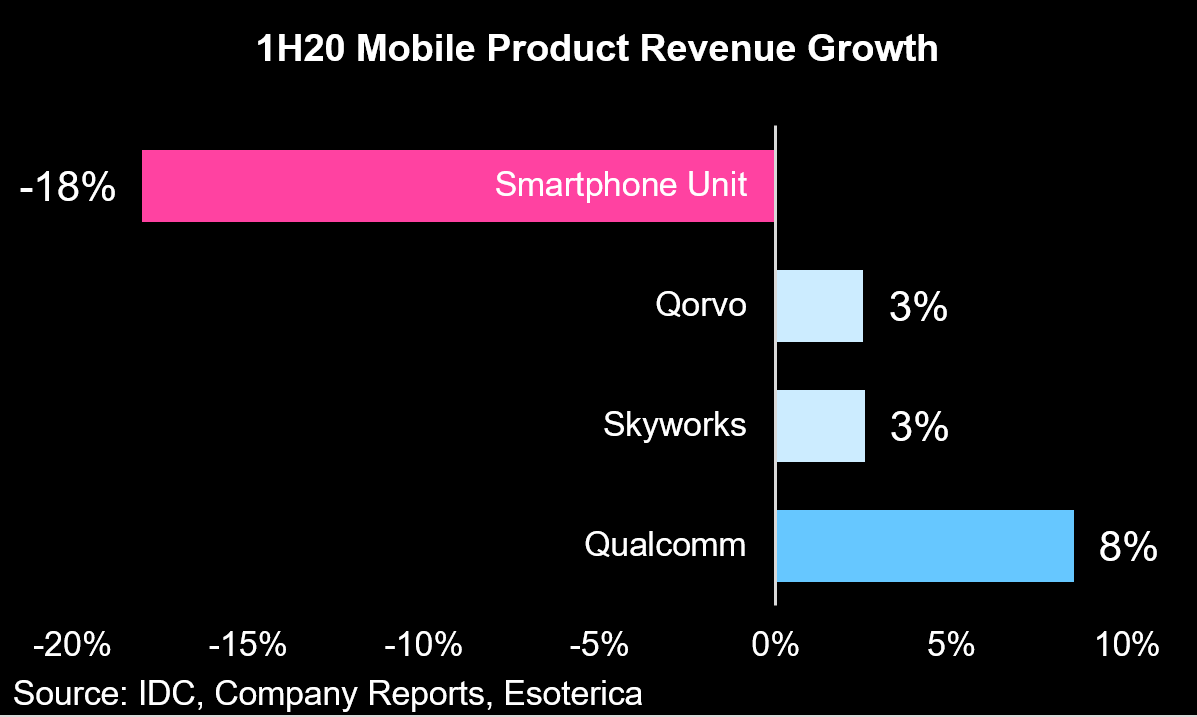 Mobile Product Revenue Growth in the first HALF of 2020

Mobile Product Revenue Growth in the first HALF of 2020

The successful push into the RF front end market supported Qualcomm's chipset business in a very challenging time so far this year. According to IDC, smartphone shipment declined 18% in the first half of 2020, Qualcomm isn't doing that much better with chipset shipment declined 17%. However, thanks to the RF front end that ships with every Qualcomm baseband, the average price tag is now ~$30 compared to ~$23 in the first half of 2019, a sweet 30% increase year over year. While both Skyworks and Qorvo are also benefiting from RF content growth in 5G devices, Qualcomm appears to be the bigger winner thus far. 