Intel's recent announcement of exiting 5G smartphone modem business attracted a lot of attention lately. However, most people seem to have ignored the second part of the announcement, which is their continued focus on 5G network infrastructure and related datacenter opportunities.

The datacenter is actually one of the most important battlegrounds of 5G. As 5G ecosystem develops, the amount of data generated will grow exponentially and requires an increasing amount of process, storage and network ability to handle all the data.

Our chart below summarizes the positions of major semiconductor companies in three of the most important parts in datacenter semiconductors: compute, storage and network. Interestingly, we see 3 camps emerging, with a few other companies on the side fighting their own battle. 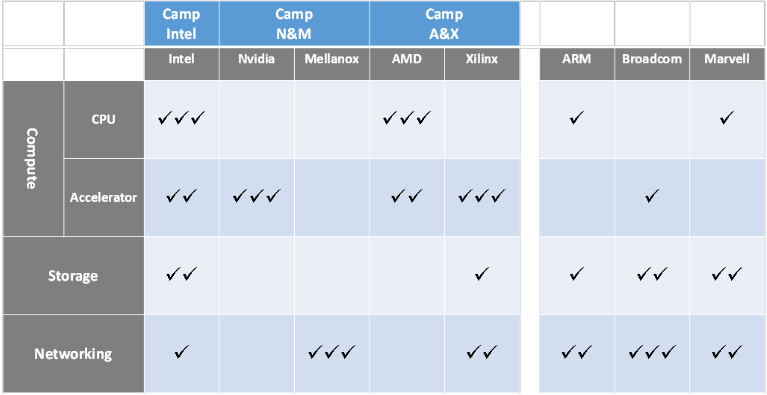 It is an exciting time for Datacenter Semiconductor providers. Competition is clearly heating up, and competitive dynamic changes rapidly. It reminds us of the classic Chinese historical novel Romance of the Three Kingdoms (no, it's not a love story), and we will keep a close eye on any new development.