For over five years, we have been an AMD shareholder, with a core thesis on AMD taking market share from Intel in the PC and Server CPU market. This month, AMD's market capitalization surpassed Intel for the first time in its 50 years, although ceding to Intel shortly after. It is a good time for us to re-examine our investment thesis.

Our AMD thesis is two-pronged: 1) Cloud and high-performance computing are the best growth opportunities in the semiconductor market, and 2) AMD's product leadership against Intel by leveraging TSMC's more advanced process technology.

The first pillar remains intact. Take Amazon's AWS, for example; it is now a $70 billion business still growing at 35-40%, slightly slower than the 40-45% growth five years ago when it was merely a fifth of the current size. The Capex spending from the world's largest hyperscale data-center operators grew at 24% from ~$50 billion in 2016 to over $150 billion in 2021, with no signs of slowing down. Ebbs and flows aside, cloud and high-performance computing are likely to remain an important growth driver for years in the future.

The second pillar was truer than ever. On Intel's analyst day recently, Intel's CEO Pat Gelsinger conceded that Intel won't have the process and product leadership until 2024, leaving AMD a good 2-year window for further share gain. In addition, we have less confidence in Intel regaining process leadership, given that they will have to flawlessly execute the aggressive plan to introduce five new nodes in four years.

However, the most astounding comment from Intel's analyst day has nothing to do with its own roadmap but one on geopolitical tension. Pat stated that "a bet on Intel is a hedge against geopolitical instability in the world." We don't entirely agree with his statement, but it is undeniable that geopolitics has become more critical than ever in any investment decision. Case in point, TSMC's significant underperformance right after Russia's invasion of Ukraine is a vivid reflection of investors' growing detestation of geopolitical risks. Geez, people connect dots fast!

The Russia-Ukraine conflict remains fluid, but we want to offer a contrarian, and hopefully more nuanced, perspective. The crisis elicits apparent perturbation over Taiwan, which shares perfunctory geopolitical similitude with Ukraine. However, we do not see China’s military action against Taiwan as an imminent risk. As an "unsinkable aircraft carrier" praised by General MacArthur, Taiwan's critical strategic importance as the essential midpoint of the First Island Chain and innate isolation without being bordering on landmasses provide geopolitical security not enjoyed by Ukraine.

With China's long-established acute risk aversion and Russia's being economically sanctioned serving as a deterrent, Taiwan sits at the equilibrium of the military balance of the Western Pacific, sustaining fait accompli despite intermittent rising tensions. We will shed more light on the subject through investors’ lens in the future. Nonetheless, the world is entering a much more complicated era, geopolitical-wise.

The Fed Chair Jerome Powell reaffirmed whatever it takes during his testimonies before Congress and Senate last week.

Fed Chair Powell: "I hope history will record that the answer to your question is yes."

The testimony to the Senate Banking, Housing, and Urban Affairs Committee on March 3rd, 2022.

The Fed acknowledged the uncertainty due to the Russian-Ukraine conflict, but not to the market's extent. The 50bps hike in March is dismissed, but the Fed leaves the door wide open to more aggressive tightening if incoming data warrants so. The war, the increasingly tight financial condition, and the downside risks to growth have not deterred the Fed yet, and inflation entirely occupies the Fed's mind.

The Fed took the blame for their bad call on inflation that has worsened in recent months. The worry was the inflationary pressure might have broadened and intensified into core services categories from durable goods. The war makes it worse: surging prices across the commodity complex darkened the visibility of the expected improvement later in the year. How long and how fast? Nobody knows. But the Fed does know that a long-lasting price surge plus a hot job market can easily ignite an undesired wage-price spiral. They must put out the fire.

Then we won’t be surprised to see the Fed is broadcasting higher terminal rates in the future FOMC meetings (the white line in Chart 1). When they carried out similar tasks in 2018, real and nominal rates rose, and the curve flattened further. We don’t dare beg to differ this time either.

The market is no longer generous in multiples, but the solid fundamentals don't warrant a near-term recession risk either. The closest historical resemblance might be from late 2017 to 2018. Inflation is the differentiating variable now, dictating the hawkishness of the Fed in the near term. Don't fight the Fed. We stick to our call for large-cap, high-quality growth assets within equities but stay mindful of pressure on valuations.

SaaS: When Valuation and Quality Matter

The Fed's sudden pivoting to hawkishness hit SaaS companies much harder as the sector had indiscriminately enjoyed the lofty valuations for its attractive business models and seemingly sustainable long-term growth opportunities (Chart 3). However, when the tide turns, valuation and quality finally matter. As Software's earnings season is coming to an end, we share some interesting observations. 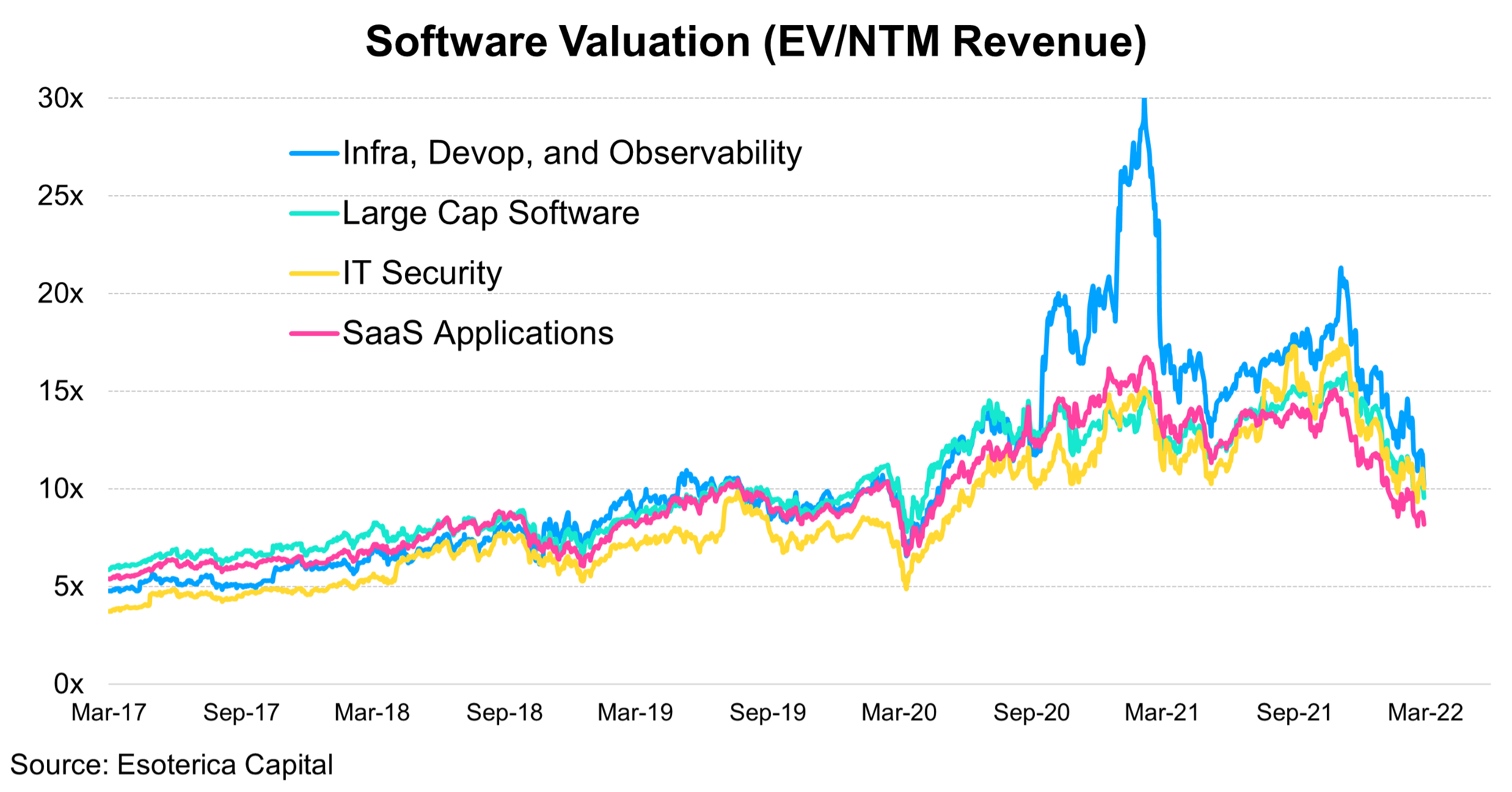 However, after this cleaning up, we believe SaaS presents one of the best opportunities to long-term investors, given robust market demand and attractive valuations. It will remain challenging to deliver alpha in a market full of short-term noises; we have to be more disciplined toward valuations and more prudent by asking ourselves the hardest questions like "how big of TAM is actually achievable?"