Corporate Earnings: So Far, Not So Bad

“That may change when recessions come. I've been through a few of them. They happen fiercely and suddenly. But as of now, so far, so good.”

The second quarter earnings season was an interesting one. While some companies were more mixed, most delivered results better than feared for the quarter ended in June.

Public cloud spending continues to be the bright spot. Amazon's AWS grew 33%, and Microsoft Azure was up 46% from last year. The cloud providers' results point to the demand environment that is moderating but still at a healthy level. In addition, the cloud providers' business outlook doesn't seem to be negatively impacted by the recession fear in a meaningful way as they kept their Capex plan essentially unchanged. Surprisingly, Meta increased the midpoint of its 2022 Capex spending plan by $500 million, even with its core advertising business under heavy pressure.

The strong Capex spending from these mega customers continues to benefit hardware and semiconductor companies with outsized exposure to the data center end market like Arista. On the other hand, smartphone-exposed companies, including Qualcomm and MediaTek, both provided a weaker outlook, as expected; Intel and AMD also revised down their expectations for the PC market. Overall, the message is not too different from three months ago: consumers are not so eager to buy new gadgets, but companies continue to invest in their technology infrastructure.

However, the better-than-feared results don't mean we are out of the woods. When asked about a potential recession, Arista's CEO Jayshree Ullal reassured us that she doesn't see any signs now but also reminded everyone that the environment could turn fiercely and suddenly. The disastrous result from Snap was a perfect example.

Snap saw its business growing at a 30% rate in April, and the 20%-25% growth target the company provided for the second quarter was perceived to be conservative at the time. However, a short four weeks later, Snap surprisingly preannounced negatively, and the quarter ended up growing only 13%. The rate of deceleration in May and June was nothing short of astonishing.

The deceleration throughout the second quarter was also echoed by Alphabet and Meta but to a lesser degree. Even ServiceNow, one of the best software franchises, starts to see an elongated deal cycle at the end of June. It's not hard to make a case that worst is yet to come, and there's a more challenging test waiting down the road.

Financial Markets Getting Ahead

Companies might take their time to incorporate recession scenarios into their forward guidance fully, but financial markets didn’t waste a minute casting their votes for what might come. The dominating narratives have quickly shifted from the recession trade in June to the recovery trade in the middle of July (Chart 1). As the old saying goes, markets are always leading fundamentals.

The logic behind the trade seems straightforward: the Fed’s hikes are aggressively enough to put inflation under control at the cost of economic growth. A recession is inevitable, and the Fed will have to ease again. Since financial markets have priced in all the pains (inflation trade, recession trade), it might be the time to leapfrog to recovery.

Without the inflation problem, the Fed had probably pivoted towards easing as their policymaking used to rely heavily on forward-looking indicators (PMI, yield curve, etc.), which have all been weakening. But the sticky inflation is the problem this time, and the lagging indicators (CPI, Unemployment Rate, etc.) carry more weight. Despite all these, financial markets still collectively decided to front-run the Fed. 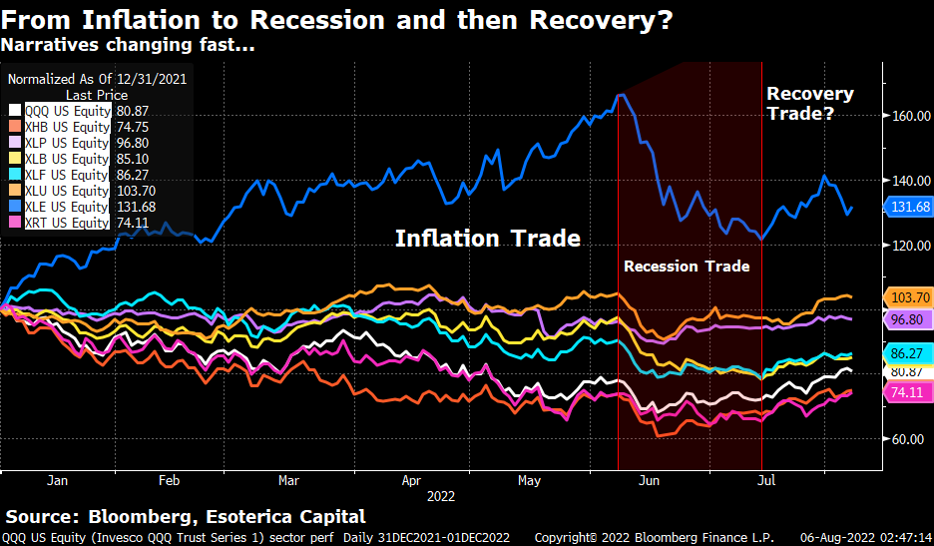 From Inflation to Recession and then Recovery?

From Inflation to Recession and then Recovery?

The Fed Pushing Back

We didn’t find the Fed’s July FOMC meeting particularly dovish, but the market shrugged off all the hawkish warnings from the Chair anyway. Even the still red-hot wage growth (ECI, Chart 2) couldn’t stop the market: from July 27 to August 02, the 10Y real yield dropped from 40bps to 3bps, rolling back a significant amount of financial condition tightening that the Fed long for.

The Fed officials subsequently came out to push back hard (see summary below), but the impact seems limited (10Y real yield up to 20bps-ish). The stronger-than-expected July job report last Friday helped push the real yield higher (35bps). It will be interesting and crucial to figure out where the rates will go after digesting the warnings and new data (NFP, CPI, etc.).

The Fed officials subsequently came out to push back hard

The Fed officials subsequently came out to push back hard

The Fed officials subsequently came out to push back hard (see summary below), but the impact seems limited (10Y real yield up to 20bps-ish). The stronger-than-expected July job report last Friday helped push the real yield higher (35bps). It will be interesting and crucial to figure out where the rates will go after digesting the warnings and new data (NFP, CPI, etc.).

Chart 3 demonstrates how rates anchor equity valuations. After struggling with the appropriate neutral rate for the US economy in the second quarter, the market has been leaning towards a lower range to justify a relatively low growth environment once inflation comes under control. At this point, growth equities are fairly valued relative to the neutral rate (Chart 3).

In the near term, stronger-than-expected growth data could lift the neutral rate and pressure the equity valuation. Good news becomes bad news indeed. The impact of worse-than-expected inflation data is unclear. It depends on how much worse the coming inflation prints: markets could shrug it off or bring inflation trade back. However, the bar to lift the neutral rate up to the level in June seems high. In the absence of a catastrophic inflation dynamic down the road, we’ve probably seen the worst of this downturn. It’s a big if, but we will see. 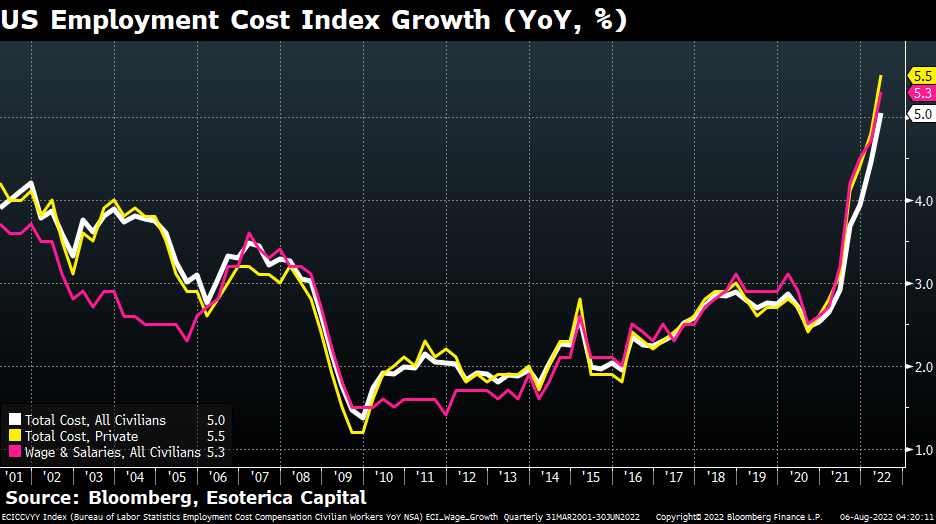 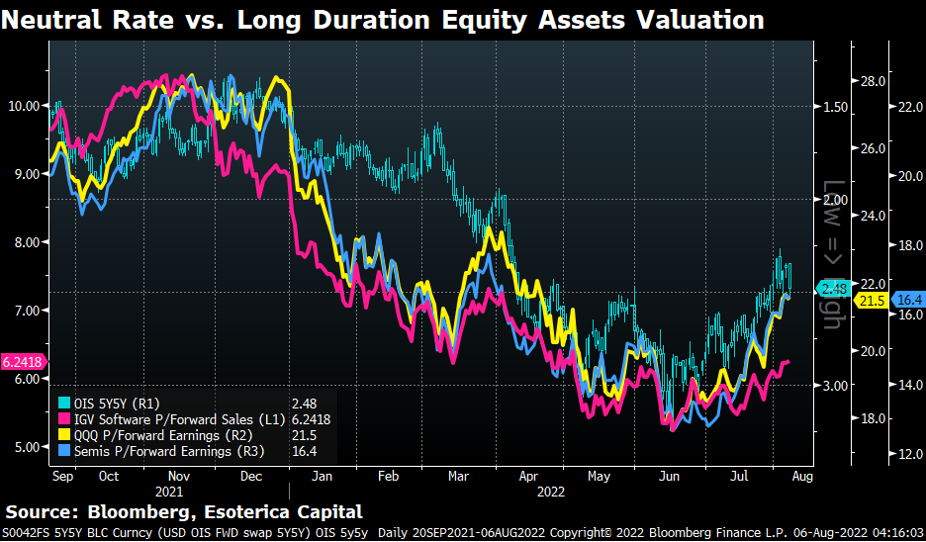