From Inflation to Recession

"I have to underscore that we are in serious times here, and the headwinds are fierce. We need to execute flawlessly in an environment of slower growth, where teams should not expect vast influxes of new engineers and budget, …, we continue to prioritize our Modern Recommendations infrastructure to improve ranking, alongside a push in our Infrastructure team to 5x the amount of available GPUs in our data centers by the end of the year." -- Chris Cox, Meta Chief Product Officer

"If I had to bet, I'd say that this might be one of the worst downturns that we've seen in recent history.” -- Mark Zuckerberg, Meta CEO

We cannot find a better way than the quotes from Meta executives to convey the confusion and frustration prevailing in the market for the best part of June. For the first time in this downturn, the equity market started to seriously transition into a recession trade from an inflation one, evidenced by the decisive fall of value factor (Chart 1). The seemingly unanchored inflation prints (CPI, consumers’ long-term inflation expectations, etc.) cornered the Fed to hike 75bps and reiterate their resolve to control inflation at whatever costs. A recession seemed inevitable while exaggerated by the weaker forward-looking economic data (PMI, consumer confidence, etc.) Markets priced it as such across the board: the capitulation of the commodity complex, the falling breakeven, and a very strong dollar. 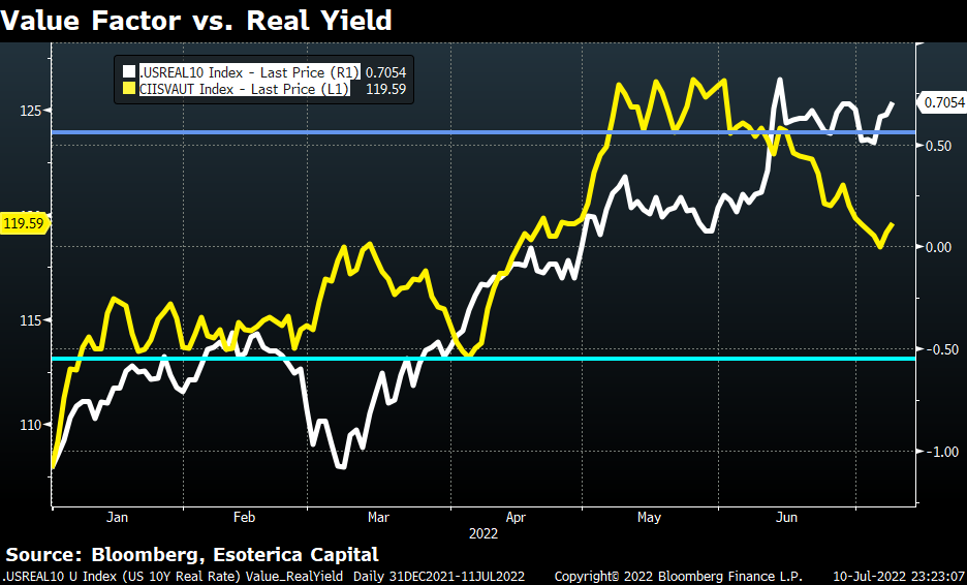 Nobody was more confused and hurt than semiconductors in this hiking cycle, particularly the growth ones. They were out of favor during the inflation trade for their relatively high multiples (Chart 2), then got slapped again when recession fears drove price actions: it’s hard to fight the market’s perception that semiconductors are cyclical. Take AMD, for example, the stock was beaten down badly year-to-date while the forward EPS was revised up 43%. The 61% of multiple contractions did the real damage.

There is a widespread narrative that equities won’t see their bottom until companies revise down earnings estimates. In other words, both analysts and company management are still naively optimistic. We shared our findings last month, “the earnings revision is a lagging indicator for timing the market corrections and subsequent recoveries,” and suspect that, for secular-growth companies like AMD, we are unlikely to see a meaningful downward earnings revision at last. This echoes the sentiments from Meta: even in the worst downturn, they will continue to invest in data centers (5x the amount of available GPUs!). Why does this matter? When multiples start to expand again, these high-quality growers are more likely to demonstrate greater convexity. Time will tell. As illustrated in Chart 2, many semiconductor stocks were penalized on multiples despite fundamentals improving year-to-date.

many semiconductor stocks were penalized on multiples

many semiconductor stocks were penalized on multiples

Ironically, from the Fed’s perspective, a strong economy at this point might turn out to be counterproductive when they prioritize inflation over everything else. The only tool they have is to tighten financial conditions; the only thing they could do is to depress demand to resolve the imbalance. I have a hard time imagining Chair Jay Powell is genuinely happy with a still red-hot labor market and the U.S. consumers’ retail spending, excluding automotive, still up 9.5% YoY in June, according to Mastercard. In our opinions, soft-landing has become increasingly irrelevant. Growth equities such as SaaS, FinTech, and even growth Semis have priced in a not-so-mild recession if history is any guide.

The recent price actions in the rates market are also very telling, although our reading might differ from the textbook. The falling inflation expectation breakeven (Chart 3) signaled growth concerns for a potential recession. On the other hand, the real yield refused to drop as investors believed the Fed must keep putting its foot on the brake before winning the battle against inflation. There is no sign of winning yet and the worry is on the upside. This smells more like “stagflation.” The Fed will be forced to push harder on the brake pedal if incoming inflation prints suggest so. In that case, the real yield will likely test 100bps. However, we also believe the real yield will likely drop back to 0bps-ish once inflation comes under control, as suggested by James Bullard (see our monthly letter in May). 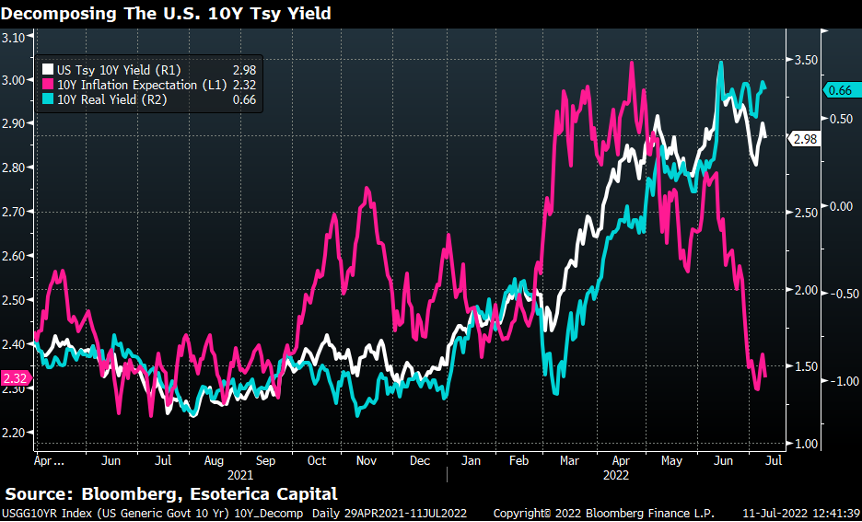 The tricky part is figuring out whether the real yield will test 100bps (inflation trade) before falling back to 0bps (recession trade). The path is particularly important for growth assets as 100bps real yield will depress valuations more, even from the already depressed levels. As we’ve shown earlier, the fundamentals don’t matter in this scenario. Another underappreciated risk of +100bps real yield is the liquidity crunch it might cause. We don’t know what an overly aggressive monetary policy could break until it’s done. This time IS different. The unsettling inflation stays in the way of financial assets and the real economy from finding their new equilibrium. The longer it stays, the bigger the tail risk. It’s very tempting to call the bottom of growth equities at this point, but we encourage our readers to stay a little more patient for the reasons discussed above. We will also get a longer window for mispricing as the Fed relies on lagging data for policy making. As such, volatilities could stay elevated throughout the course as well.