“There are decades where nothing happens, and there are weeks where decades happen.” -- Vladimir Ilyich Lenin

March 2022 will go down in history as one of those times. The Russia-Ukraine war has profoundly changed the geopolitical landscape, and sitting on the sidelines seems no longer an option for superpowers. The soaring commodities prices turned an already uncomfortable inflation outlook into a scary one. The Fed carried on its hawkish stance, igniting an intense selling-off in the rates market and ultimately the inversion of yield curves. Not to mention the unprecedented ups-and-downs of Chinese equities provoked by growth concerns, delisting fears, and a timely pro-market "policy put" by Vice-Premier Liu He. You would have expected risky assets to fare poorly. Well, not so fast. QQQ finished the month on a solid footing (4.67%), despite an intra-month 8.25% drawdown followed by a head-scratching rally. Welcome to investing.

A Front-Loaded Catching Up

We expected the Fed to execute on its "whatever it takes" pledge to put out the fire, and in the FOMC March meeting, they delivered in a front-loaded fashion. The Fed signaled to raise the terminal rate (the highest level of fed funds rate in the cycle) above the neutral rate (the rate at which monetary policy is neither restrictive nor accommodative) to cap the roaring inflation expectations. The market well received the message: the market-implied terminal rate (MSTERM Index, Chart 1) has quickly priced in the Fed's policy tweak and sharply gone beyond the market-implied neutral rate (OIS 5Y5Y rate, Chart 1). 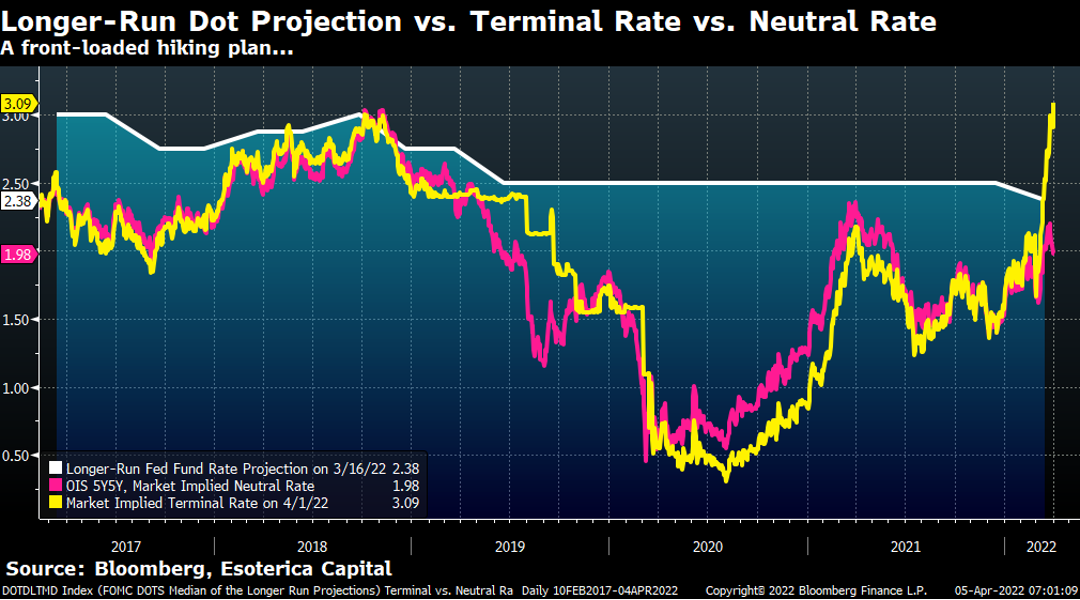 The Fed's lowering of the longer-run fed funds rate projection (Fed-implied neutral rate, Chart 1) is an underappreciated policy move, intending to project the Fed's confidence in not letting the inflation out of control. We believe it helped calm down the nerve of the equity market and spurred the rally. The Fed officials tried extremely hard to depict a 1994-like soft-landing narrative, and the equity market hasn’t given up on that hope yet.

The large-cap, high-quality growth equities (QQQ as a proxy) have demonstrated much better convexity in this short-term rally (Chart 2). The valuation of QQQ has recovered quite a bit more than BVP Nasdaq Emerging Cloud Index as the Fed's lower longer-run dot anchored the market-implied neutral rate (inverted, Chart 2). With a maturing cycle and low visibility into inflation outlook, the large-cap, high-quality growth equities offer relatively better risk/reward trad-offs. 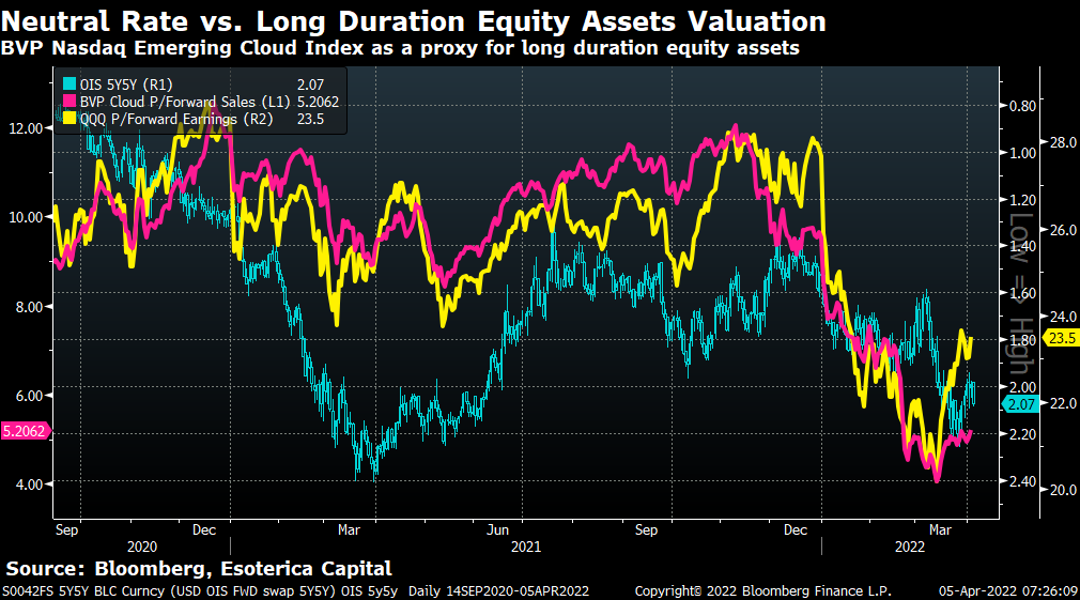 No Longer Behind the Curve

On the other hand, the Fed offers an alternative yield curve measure, the near-term forward yield spread (yellow line, Chart 3), which they believe is a better indicator for the near-term trajectory of monetary policy rates; therefore, the Fed’s policy stance. It's essentially the slope of the front end of the yield curve (such as the spread between the 2-year and 3-month rate). This alternative yield curve measure has been steepening in recent months, at significant odds with the conventional ones. The contradicting messages from different parts of the curve confused investors who rely on yield curves to gauge the market cycle. 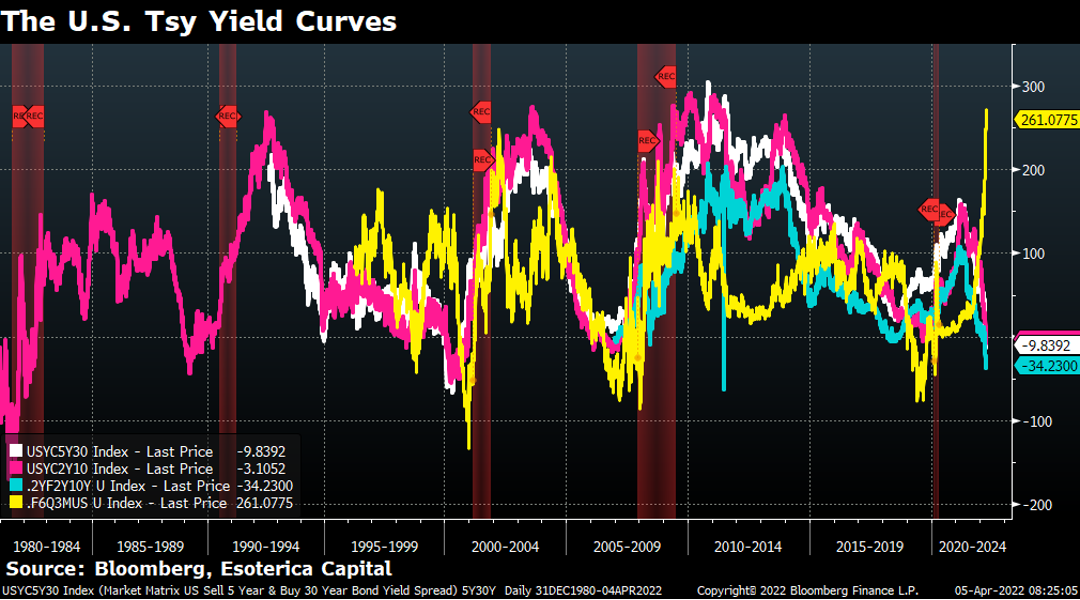 Instead of pondering the implications of yield curve slopes, we found the curvature of the yield curve (3M2Y10Y butterfly as a proxy) has been very informative regarding whether the Fed has been keeping up with inflation expectations. 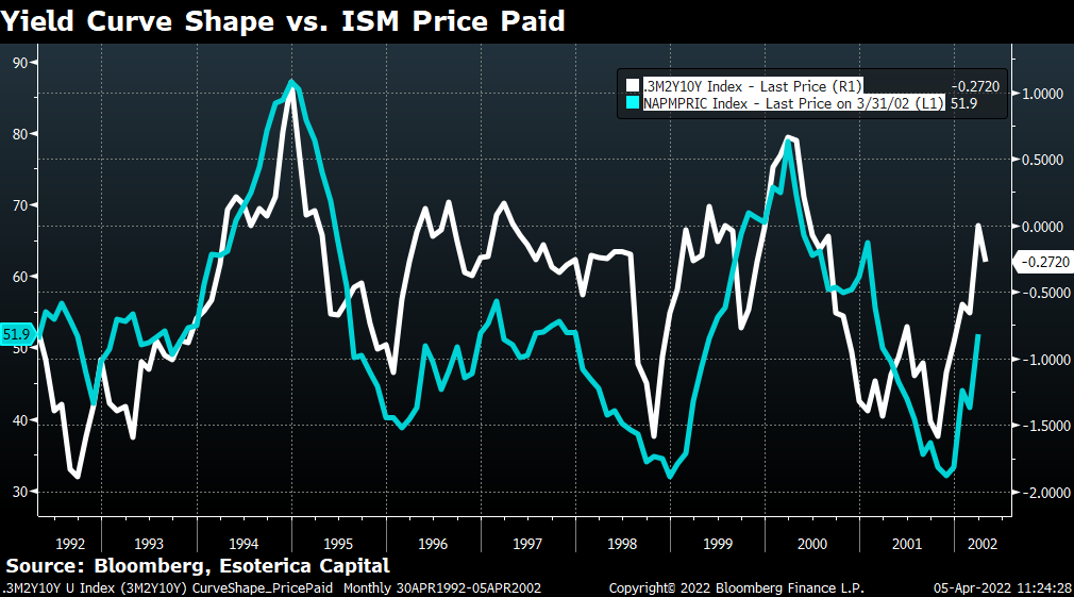 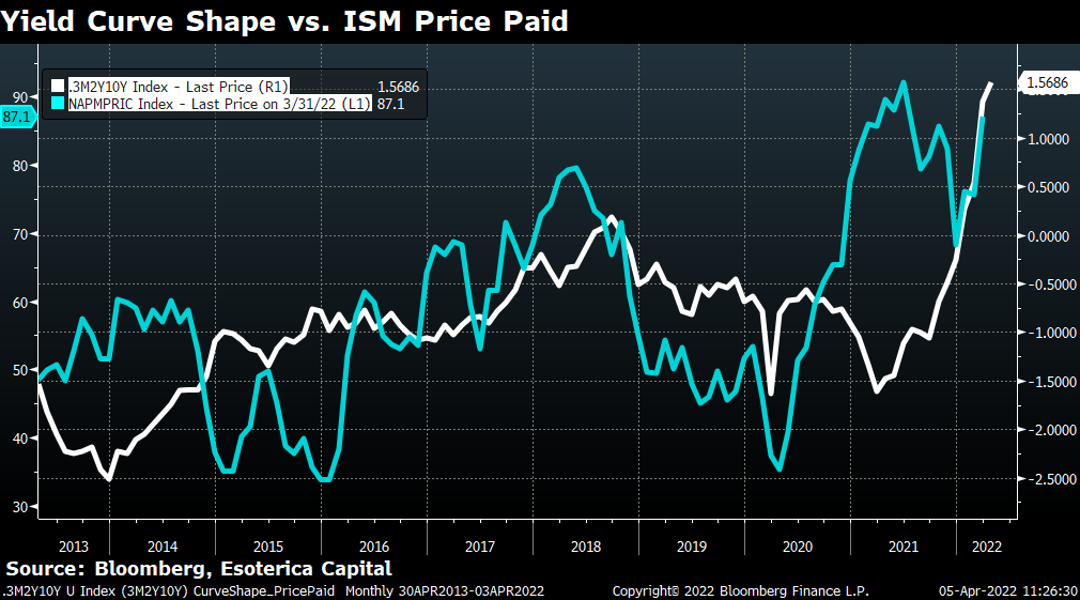 Take the decade from 1992 to 2002, for example (Chart 4); the curvature of the yield curve had been consistent with the inflation expectation (ISM Manufacturing Price Paid as a proxy), indicating the Fed had been spot-on. That probably contributed to a rare but successful soft landing. In the past decade, the Fed was not noticeably behind the inflation curve until 2021 (Chart 5). However, the Fed has caught up quickly and doesn't seem behind the curve anymore by the same measure.

The flipside of a humped yield curve (as the one we currently have) is the decrease in the financial system's liquidity (M1 growth as a proxy, inverted, Chart 6). The Fed has publicly acknowledged this notion: tightening financial conditions is necessary to bring inflation back in line. As such, the pressure on risky assets remains intact. Don’t fight the Fed. 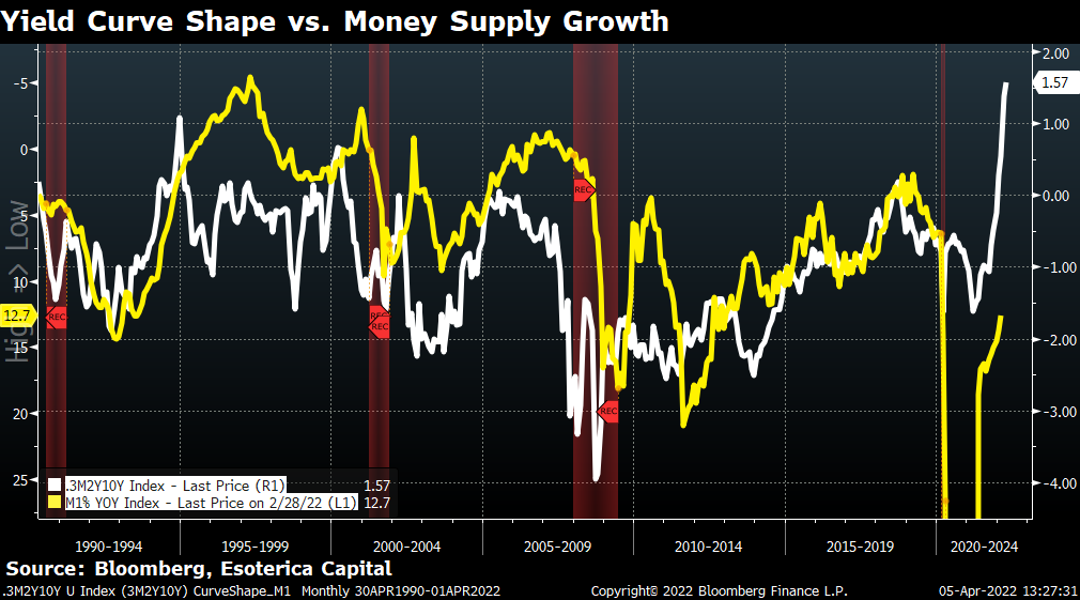 The latest ISM PMI indicated a slowing but not contracting U.S. economy (Chart 7). If history is any guide, growth investors are bound to rotate out of semiconductors for their inherent cyclicality and into software for the durability of growth. We like the current set-up of software and watch a few trends and risks as follows,