“Skip the rhetoric and go to the meat.”

A Matter of Timing, Not Earning

With the help of a softer CPI print in November, the markets finally embraced the narrative of peak hawkishness that we have been writing about in the past months. Our proprietary market cycle indicator suggests that the valuation of risky assets might have found the bottom (Chart 1). It seems logical to shift focus to earnings in the coming quarters (PMI as a proxy). However, the earnings estimates are not the only thing that matters; the Fed’s policy pivot could be overwhelming. It is a matter of timing, in our opinion.

The year 2019 gave a vivid illustration: the earnings were revised down throughout the year, but the equity rose significantly (Chart 2). The trick was that, on January 4th, Chairman Jay Powell delivered a dovish pivot in a moderated discussion during the American Economic Association’s annual meeting. Subsequently, the Fed paused the rate hike at the January FOMC meeting and started to cut six months later. The rest is history. 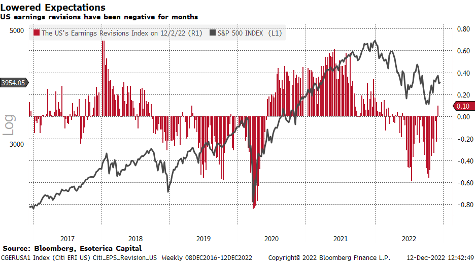 US earnings revisions have been negative for months

US earnings revisions have been negative for months

This cycle is different as the Fed emphasizes more on the lagging indicators for inflation concerns. However, after a year-long aggressive front-loaded hiking, with all the evidence that the tightening has taken effect, we are closer to the point where the Fed should pause.

Soft Landing, Why Not?

Our profession is very good at inventing jargon with ambiguous definitions. “Soft landing” takes the crown this year. It loosely refers to a macro development in which inflation cools, and the labor market loosens, but the economy skirts a recession. From a portfolio manager’s perspective, it practically means that the ISM PMI falls enough in responding to the tightening monetary policy but does not dip into the territory depicting deep recessions (Chart 1; Chart 4).

The latest ISM PMI slipped into the contractionary territory, at odds with some reliable leading indicators that we track (Chart 3). The most forward-looking PMI New Orders seem to consolidate, in line with consumer confidence spread (expectation vs. current) and the 5Y30Y yield curve, at the level that suggests the bottom of a downturn outside deep recessions (Chart 4). We do not see any reason that soft landing is totally out of the question. 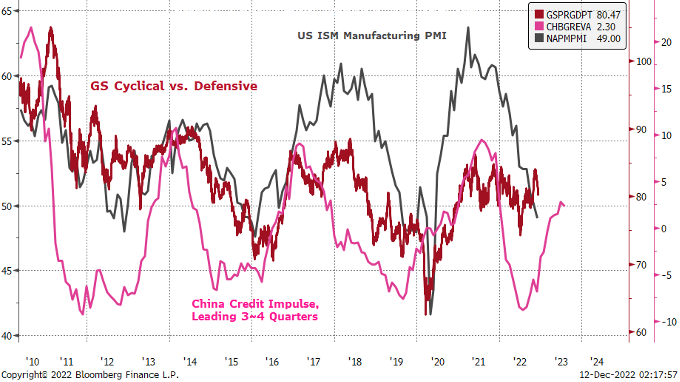 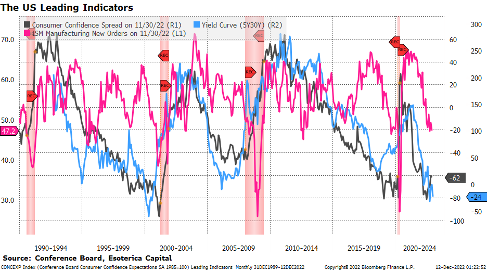 The US Leading Indicators

The US Leading Indicators

The investment sentiment towards growth technology has not been this bearish for a long time. The end of a tech era, as we heard. We share the short-term pain but remain optimistic about the long-term gain, particularly in fundamentally better markets with stronger growth and longer product cycles. Cloud/AI is such an end market for data-center semiconductor investors, albeit the near-term demand cut seems imminent. The near-term de-risking is understandable and even welcomed. The longer-term pessimism looks overly done to us (Chart 5).

The US Big 5 Cloud Capex Spending and QoQ Growth

The US Big 5 Cloud Capex Spending and QoQ Growth

Another example is Tesla, whose stock was severely hit in recent months. The company came across seemingly endless near-term troubles: First, weak demand in China and US forced Tesla to offer more promotions and cut production in its Shanghai factory, potentially hurting its automotive gross margins. Second, Tesla’s backlogs across regions have been dropping quickly. Worse, China’s backlog was almost depleted (Chart 6). Wall Street cannot help worrying that Tesla is no longer a supply-constraint growth story but with a worsening prospect into 2023, thanks to intensifying OEM competition. Lastly, Elon Musk, the company’s CEO, seems more interested in Twitter than Tesla, at least at the moment.

Despite all these near-term frustrations surrounding the company, we are more excited about the recently launched FSD beta for North American drivers. The FSD adoption should see an uptrend and even accelerates when the beta is completed. Tesla could unleash its potential as a software and data company by then. That said, investors should use a crisis wisely. 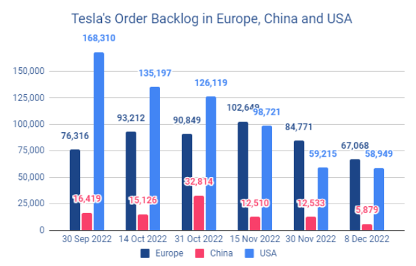