How does one measure how fast a country is growing? In the U.S., the two most popular measures of nationwide growth are gross domestic product (GDP) and gross domestic income (GDI).

GDP is akin to a bottom-up measure, as it tracks what the economy produces. This includes goods, services, technology and intellectual property. GDI, in contrast, measures how much a country makes from the things that it produces – the income. This includes wages, profits and tax receipts.

In theory, GDP should always equal GDI. In reality, the two are almost always different. Fortunately, the two measures do converge over extended periods of time, as shown in the table below.

Which growth measure is better? It is hard to say. GDP is more popular and widely recognized. Folks like myself use an average of the GDP and GDI to get a more accurate reflection of growth. Gross domestic output is the name of the statistic based on the average of GDP and GDI.

It is informative to track how fast a country is growing over time, but it is much more informative, in my opinion, to understand what is driving that growth level. I like to decompose the GDP number into six subcategories, as shown in the table below. The six categories include: 1. Consumer spending, 2. Business spending, 3. Government spending (Local+State+Federal), 4. Net Trade (Exports minus imports), 5. Spending on residential housing, and 6. Net Inventory (the change in inventory from one quarter to the next). 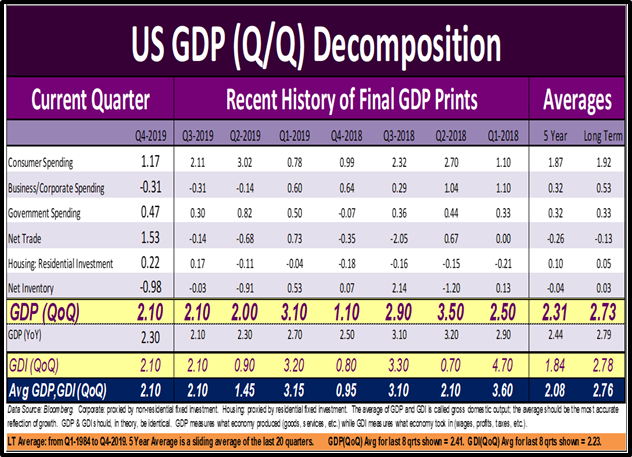 Notice from the table that the six subcategories sum to the GDP number (i.e., it is footed). If we focus on the far-right column in the above table, we see three things: (i) the biggest contributors to GDP in the U.S. over the long-run are consumer, business and government spending (the top three lines), (ii) trade, housing and inventories are close to zero, and (iii) GDP tends to average 2.73% per quarter, while GDI averages 2.78% (i.e., the two are almost identical over time).